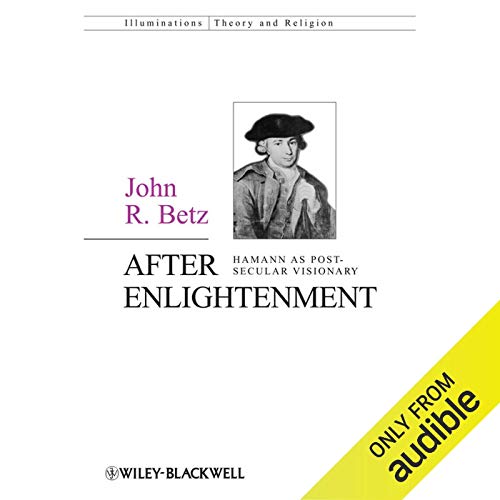 After Enlightenment: Hamann as Post-Secular Visionary is a comprehensive introduction to the life and works of 18th-century German philosopher, J. G. Hamann, the founding father of what has come to be known as Radical Orthodoxy. Provides a long-overdue, comprehensive introduction to Haman's fascinating life and controversial works, including his role as a friend and critic of Kant and some of the most renowned German intellectuals of the age.

Features substantial new translations of the most important passages from across Hamann's writings, some of which have never been translated into English.

Presents Hamann as the 'founding father' of a distinctly post-modern, post-secular theology and, as such, as an alternative to the 'postmodern triumvirate' of Nietzsche, Heidegger, and Derrida.

Considers Hamann's work as a touchtone of modern Jewish-Christian dialogue, in view of debates with his friend Moses Mendelssohn.

Explores Hamann's role as the visionary founder of a 'metacritical' movement that radically calls into question the basic principles of modern secular reason, and thus reprises the debate between those defending Hamann's views and those labelling him the bte noir of the Enlightenment.