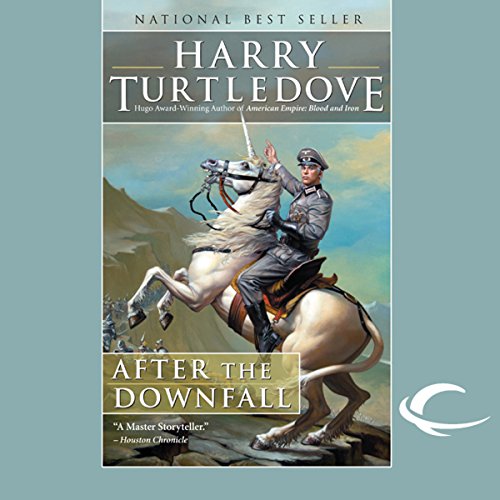 What listeners say about After the Downfall

I would recommend this story I had no trouble in getting into the story and found it hard to stop listening to it. I liked the way it brought forth the two sides of racial problems based on nationalities or just looks.
I had a giggle at the accent and the mans view of sex.

A Nazi gets a healthy dose of self-awareness...

First off, there's a lot of negative reviews concerning this audio book. Don't believe a word of it. While this isn't in Turtledove's wheelhouse of alternate history, the story is well told for what it is. Some might cringe at the idea of a Nazi protagonist, but this isn't a story glorifying the ideals of Nazism. The protagonist isn't a member of the Gestapo or part of a death camp's staff; he was a regular army officer fighting the Soviets on the Eastern Front, which history has shown as a case of bad guys fighting other bad guys. Hasso saw the war right up to the losing end, only to get magically sent somewhere new. In his new position, he's forced to reevaluate a lot of beliefs he essentially took for granted but never really thought about, particularly on who exactly counts as "people". Alongside him, the side characters on both sides fit very well with the setting. If possible, I wish Turtledove could've explored this world more with later volumes. As for the narrator, he does a good job. Some have said the German accent sounds bad, but I think it works. So kindly give both this book and its protagonist a chance.

Amazing book really wish and hope harry turtledove makes another one to go along with it!

pleasantly surprised how good this book was!!

With all the negative reviews ,I wasn't sure if I wanted to try . I am very happy that i did give the book a chance. The book was really well written and the narrator was clear and pleasant. I have read many books by this arthor and this is among the best in my own opinion.!

dyed in the wool turtledove fans.

Would you ever listen to anything by Harry Turtledove again?

i have read and listened to turtledove before and will again.

Poor choice of book - not what I expected.

Would you try another book from Harry Turtledove and/or Eric Michael Summerer?

Yes- it was just the subject matter of this one using magic that I disliked.

Would you ever listen to anything by Harry Turtledove again?

Yes - I have read many of his books and will do so again. I enjoy his alternate history books.

Which character – as performed by Eric Michael Summerer – was your favorite?

The hero was believable and the Nazi theories about racial supremacy were true to form. . The Aryans were as mythology says they were.

Disappointment. From the title I had guessed it had something to do with the Roman Empire.

The novel relies on "magic" which I found less satisfying than Mr. Turtledove's other books. I am a scientist so I am understandably skeptical about the existence of magic.

The plot was utterly pointless and meandering. None of the magic or fantastic happenings were ever explained. I also got really tired of the bad movie german accent of the main character.

Although I like the concept of this story, I must object to some of Mr. Turtledove's plot devices: in particular, his indulgence in male sexual fantasies, and his graphic depiction of male battle-lust and blood-lust. He depicts simply ridiculous male sex fantasies (e.g.: a woman taking off her clothes and invitingly lying down in the middle of the road to thank the hero for rescuing her); and, although I understand that Mr. Turtledove wanted to display the cruelty and prejudice of one race as opposed to another (comparing it to the Nazis vs. the Jews), I object to such detailed descriptions of the villains' actions, no matter their verisimilitude to real human blood-lust. Also, the hero's nonchalance in the face of this behavior does not make the reader like him very much, even though he apparently doesn't participate directly in the monstrous deeds. On the other hand, this book does have the advantage of showing the conversion of a Nazi officer to a more tolerant point of view. To quote Horton: "People are people, no matter how small."