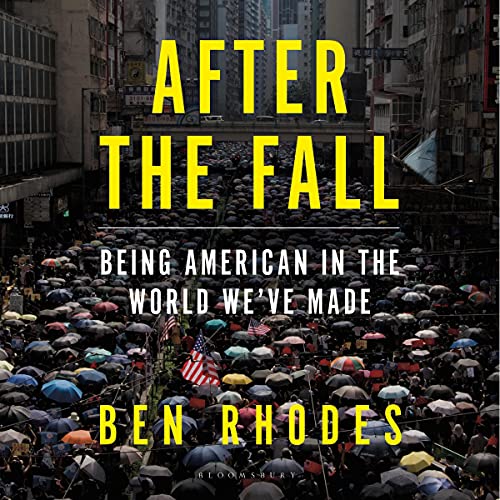 In 2017, as Ben Rhodes was helping Barack Obama begin his next chapter, the legacy they worked to build for eight years was being taken apart. To understand what was happening in America, Rhodes decided to look outwards. Over the next three years, he travelled to dozens of countries, meeting with politicians, activists and dissidents confronting the same nationalism and authoritarianism that was tearing America apart. Along the way, a Russian opposition leader he spends time with is poisoned, the Hong Kong protesters he comes to know see their movement snuffed out, and America itself reaches the precipice of losing democracy before giving itself a second chance.

After the Fall is a hugely ambitious and essential work of discovery. Throughout, Rhodes comes to realise how much America’s fingerprints are on a world it helped to shape: through the excesses of the post-Cold War embrace of unbridled capitalism, post-9/11 nationalism and militarism, mania for technology and social media, and the racism that shaped the backlash to the Obama presidency. At the same time, he learns from a diverse set of characters - from Obama to rebels to a rising generation of leaders - how looking squarely at where America has gone wrong only makes it more essential to fight for what America is supposed to be - for itself and for the entire world.

What listeners say about After the Fall

I heard of Ben Rhodes through his podcast and therefore knew him as an informed, intelligent, articulate and thoughtful commentator. This book abundantly illustrates these qualities as well as many others (like courage and integrity). I’ve learnt a lot about recent global events & America’s role on the world stage. He has given me a lot to think about and I heartily recommend it.

I will be honest and say I never understood how a creative writer major gets to be called a national security adviser. The sense one gets is a speech writer in the room when others are making strategic decisions. I wish he could have clarified what he added to the national security beyond nice words for Obama to say. That aside, this is a good read/listen. It is however bleak but naggingly pertinent. A warning to take our democracy seriously and not fall for fools like Trump and Boris. this is a time for serious politicians and maybe one for realising we made a huge mistake outsourcing everything to China. We are going to have to pay more for things, manufacture them in democratic nations and raise barriers to trade based on the rule of law and human rights. Only then can we tackle the thugocracies. There remains the distinct possibility it may all be too late.

Lots to reflect on (I'd recommend taking time during it to do so). Great motivation to take action, to think about how you can leave your mark on the world.

I think if you aren't American you need to have some patience and tolerance to not react to the sometimes overly patriotic rhetoric and self-importance, and if you do you'll see it is a careful balance of self criticism and pride, which is refreshing.

Only comment from me is that the use of the male pronoun as default happened a few times, and there were a couple of remarks I would label as culturally insensitive, but I trust the author did their best to avoid this in a book that touched many sensitive issues.

Overall definitely 5 stars and would 100% recommend!

A talented writer and insightful approach to complex ideas. I definitely learnt a lot from him

An enlightening read which paints a worrying picture of the joined up approach taken by authoritarian leaders. Thanks for your work Ben Rhodes

A big fan of the Pod and absolutely loved it. Really insightful with a blend of human experience to make it more accessible.

I’m an Aussie who first came across Ben Rhodes a year or two ago via Crooked Media’s Pod Save the World podcast. I’ve always enjoyed Ben’s analysis of world events and what it means from the perspective of left leaning democratic minded person who understands government and the intricacies of foreign policy.

After the Fall was a real eye opener to the increasing use of nationalism and ‘us vs them’ politics around the world. He shows how several countries are using the tried and true authoritarian playbook to gain control and power and through his interviews with many democratic activists around the world, instilled in me some hope that democracy is still a thing worth fighting for wherever we are in the world.

so glad to have heard this analysis

such an essential peek into the need for national as well as individual introspection . deepest political thinking about USA that I have experienced in far too long. Rhodes is a thinker not a pundit. and his narration is superb

The whole book was illuminating. Insider stories, personal encounters examining how the world (I'm not an American and do not live there) is leaning authoritarian. This is a topic that we must consider. But also one with which we misty gird our loins for the struggles ahead.
the final part of the book was my favourite, as it shone a light forward.
A good mind, a well written examination, and read by Ben himself, so I felt as though I was listening around a dinner table.
Recommend!!