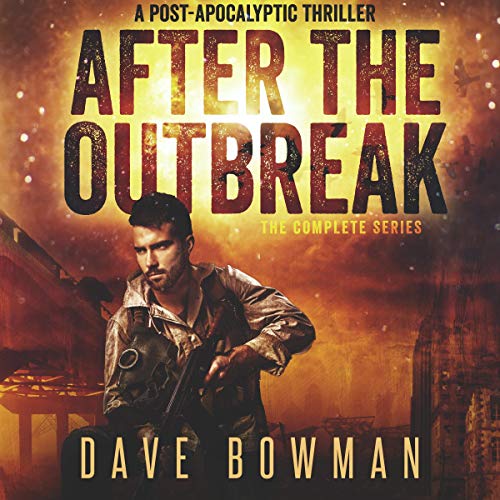 The thrilling post-apocalyptic series, After the Outbreak, now available in one complete set!

Could you push past your limits to survive the apocalypse?

After the deadliest virus known to man, law and order have collapsed. The surviving few are left to find their way among the ashes of civilization. Chaos reigns.

What if your preparations weren't enough?

Nick thought he was ready. He has a lodge in the mountains in New Mexico, packed full of supplies and ammo. He thought he could protect his family, but the virus took them anyway. Soon, he finds others that rely on him. With everything lost, can he find the strength in himself to go on? Could you face your greatest fears?

Liz is trapped in Albuquerque. A dangerous battle rages around her, and she doesn't have long to live if she stays. The only way out is through the mountains, and there's only one man who can take her. But can she put her faith in a stranger's promise?

Only a few survived the outbreak, but that was just the beginning. Now they'll have to fight harder than ever to stay alive.

After the Outbreak: The Complete Series is the three-book series about ordinary people fighting to stay alive in an apocalyptic world.

What listeners say about After the Outbreak

After the Outbreak was a great, long runtime audiobook on a non-zombie plague apocalypse centering on a group of (mostly) unrelated good people who come together to form a new family in the post plague world. The book to me falls into a rarer category of global plague apocalypse novels with no zombies, no conspiracies. In this tale, the plague globally kills 96% of the world population, decimating all infrastructure, law and order, in a matter of days.
The story begins with the individual character's stories, from all different walks of life, covering the fall, and their actions around the collapse, and their journeys to eventually coming together as a group some much later in the story than others). Once the main characters are together, the book mainly deals with getting set up for survival long term, and dealing with threats and danger as they arise.
The story never gets too dark or depressing, and is overall to me a feel good Apocalypse tale where you see good people surviving, behaving honorably, and overcoming bad people when they faced them. The story ends on a positive note, and feels complete, although I would be interested in reading more.
I received this audiobook as a review copy in exchange for an honest review, and am glad for the opportunity. The plague genre is a favorite of mine, going back to The Stand. It unfortunately is a subgenre not covered and covered well as much as other apocalyptic tales, so it is always a pleasure to find a good one like this.
The narration is very easy to listen to, fitting to the material, a good pace, and does an admiral job at distinguishing different characters. I do have a few other audiobooks with this narrator, and would definitely add more to my. I'd definitely get more from the author, but I'll need to wait for them to be published!

You can skip this one

Started out very promising but quickly took a turn towards mediocracy, at best.
Very weak character development, circular plot, bad writing. I must have heard the word "had" 38474292947437 times in the book. I'm not a grammar Nazi or anything but it was very annoying. There are many many many other books in this genre more deserving of your money. You WILL regret this story as it drags on and on and on.

I loved this book series. The narrator was awesome. His voices and emotions were spot on. He is a great storyteller. The books were amazing too. If you like post-apocalyptic books, you will like these. One of my favorite things was that no character was perfect. They each made dumb mistakes and then had to admit it was dumb. I hate it when a book has that one character who always does everything perfect and right. That’s not possible. In this series all of the characters are flawed, just like in real life. It made the characters seem so real, especially when the narrator was so good at voicing said characters. As soon as the last book ended I jumped online to see if there were anymore books in the series. I wasn’t ready to leave their world just yet. Alas, this is a trilogy, so it’s over and I must move on.

I really enjoyed this Post-Apocalyptic series as it has no zombies eating humans. A virulent (Hosta) virus strikes the county causing people to die with flu like symptoms, turning gray and dies with grin on their face. Love all of the characters Nick, Liz, Charlie, Mia, Jessa, Matt, Daniel, Anne and Bethany. They are trying to survive, fighting bad guys trying to take the women and supplies and trying to get to White Pine Falls. Highly recommend if you like Post-Apocalyptic series without zombies. Look forward to his next series. I was given this free review copy audiobook at my request and have voluntarily left this review. Thank you

Not worth a read/listen

the story line and character story lines suck, unrealistic, not even remotely believable. Don't waste your money or time on this title.

The first two books had an abundance of intensifiers, which detracted from the storyline. By the third book, there weren't as many, which made listening easier. The women were often frustrating, especially Trina, who was hard to take. I would have liked to have seen Nick step up to the plate more, as a leader, rather than letting the whining women dictate what the group did. I would like to see more books written with these characters, as well as purchasing the author's other series. It appears he is growing in his writing ability. I would highly recommend this series!

Long but worth it

I really liked this book, I started it just before the Covid 19 news broke and stopped listening for a while, seemed too real, but after things became normalized with the lockdowns and stay at home orders, I started to listen again... glad I finished it!!!

Terrible! Do not waste your time.

Poorly written and poorly narrated. Even if the story itself hadn’t been so terrible the narration would have killed it. However the story was so bad that no narrative performance could have saved it. I have over eighty books in my library and this was the first one that was so bad that I felt compelled to write a review and warn others away from wasting time or money on it.

writer doesn't seem to have any real world experience. just not very accurate. try writing something else.

This audiobook book was a brilliant surprise and I enjoyed it from the beginning to the end. It features a really likable lead character called Nick and his group of friends that come together during the time after a virus has wiped out most of humanity. There is plenty of action and tense situations as well as the odd surprise.
Some of the group members were a little frustrating, as were some of their decision making but who knows how we would react in that situation?
It was very well narrated by Andrew Tell who really brought the story to life.
I 100% recommend this book to anyone who enjoys a great adventure and I can't wait to listen to another book by Dave Bowman.
I was given this book free in exchange for an honest review and it was a real pleasure to do so

A book for idiots