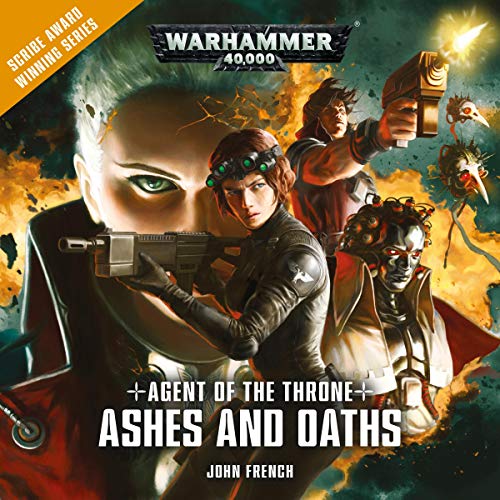 When a mission goes badly wrong, Inquisitorial agent Ianthe and her associates are forced into an alliance with a dangerous and unscrupulous figure that could have dire consequences for them all.

It's the third act in John French's Scribe award-winning audio drama series, and it sees Ianthe make her most difficult decisions yet, in the name of her mission and her Inquisitorial masters.

Subterfuge and compromise walk hand in hand for an agent of the Throne. On the blighted world of Dustcorn, an assault on an Inquisitorial target goes badly awry, forcing Ianthe and her associates into a pact with an unscrupulous ally, the mysterious Zand. With her mission in tatters, Ianthe has little choice but to agree to Zand’s terms, the assassination of a perfidious traitor. But nothing is simple where Zand is concerned, and Ianthe soon finds herself in a situation that will have far-reaching consequences for her and her team.

What listeners say about Ashes and Oaths

John French understands what makes 40k exciting and interesting - the conflict between truth and loyalty (sometimes called "faith," but really about commitment rather than eschatological concerns). Ianthe is such a good character, and the narrative conceit of the cigarette-smoking spy telling you her tales is perfect. This entry is slightly weaker than the previous by virtue of a somewhat formulaic plot (see: Eisenhorn book 1), and I didn't love all the sound design choices (I don't seem to recall Ianthe gasping/groaning so loudly in previous stories). Despite those minor critiques, it's still a great "movie for your mind" which I would highly recommend.

The Dilemma of Being a Tool For a Higher Power

Interesting story. When you are the blunt instrument used by the inquisition, what happens when you are used against your own? This is the problem with blindly following any not questioning. Great story.

Every audio drama in this trilogy has been great, and I have listened to each several times. Well worth the money.