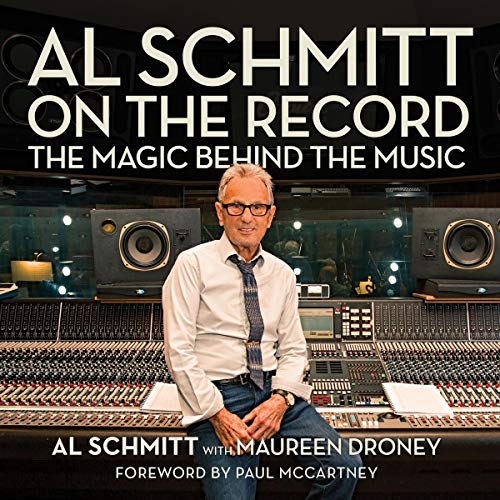 Al Schmitt on the Record

Ever wonder what goes into the creation of some of the best music ever recorded? Ever wonder how someone becomes an iconic professional who is universally admired and respected? Al Schmitt on the Record: The Magic Behind the Music reveals answers to those questions and more.

In this memoir of one of the most respected engineers of all time, you'll see how a very young boy - mentored by his uncle Harry in New York - progressed through the recording world in its infancy, under the mentorship of Tom Dowd, in its heyday, becoming one of the all-time great recording engineers. And now today Al continues as an unstoppable force at the top of the recording world with his name on mega-hits from the likes of Paul McCartney, Diana Krall, and Dylan. Al's credits include a veritable who's who of the music world.

Listening to the compelling accounts of Al's life in the studio, you'll see how he has been able to stay at the top of his game since the '50s, and you'll experience what is was like behind the scenes and in-the-studio during of many of his historic, impactful recordings. Schmitt also shares many of the recording techniques and creative approaches that have set him apart, including his approach to microphones, effects, and processors, and he even shares setup diagrams from many of his highly-lauded recording sessions!

What listeners say about Al Schmitt on the Record

The best ever story about Recording Engineering

On the Record - I just finished the book!

At the end of the first chapter I was in tears, bursting with pride for my friend Al Schmitt! Each chapter got better and better and I recalled all of the great experiences I had working in musical, stage, radio, television and recording studio environments. I recalled al of the truly great engineers, producers and talent that worked in the industries that I was blessed to run elbows with, including Al Schmidt.

I was honored to be invited by Al to come with him to Cal State Dominguis Hills to be a guest lecturer on recording technologies. I was impressed that one of the world's greatest recording engineers would donate his time to teach others about our profession. Unfortunately I was booked on sessions most of the time and could not make it.

This book is an ideal teaching tool. It does not teach you how to move a fader up and down or twist a knob. It exposes the reader to the theory of sound and where it comes from. It encourages the student on how to listen to that sound and remember all of its characteristics. Then it urges to select a microphone and record it through a preamp and console and on playback see how close it was to the original sound. Then enhance it till it rings that bell inside you. (Al takes you step by step through his processes and thinking)

Al also urges that you must be part of the act. That your presence in the production makes it better. You must exude love in what you do and for everyone you are working for. (I can't explain it further, you have to read the book)

For someone who wants to succeed in our industry I strongly recommend three copies of this book. The hard copy for reading, the electronic copy for quick equipment reference from a tablet, and the audiobook for reading on a bus, train or airplane.

I chose the audiobook on Audible. The reader almost sounded like Al and did the emotional bits perfect!

As a bonus there are many stories that Al shares with us that make us feel like we were there during historic and humorous moments in his career.

I smiled warmly every time he related working with engineers, musicians, and producers I knew from working at Sound Labs and Capitol.

I very much enjoyed listening to Al's story. The flow of the book was perfect and insightful. I'm sure I will be listening to this book again down the road.

I'd highly recommend if for anyone in the music industry.

I have met Al and Steve on a few occasions and it was nothing but a pleasurable experience. My assistant and I enjoyed a private tour of Capitol in 2017 with Steve as our guide. How lucky we are to have had that experience. This book was a journey through the life of a man that I've been inspired by before I ever knew who he was. This book will go down in the history of music as one of the greatest but hey, look who wrote it! Instant classic! Bravo Al and may you rest in eternal peace.

Al was a remarkable individual, combining qualities of hard work, selflessness, and a caring nature. I highly recommend this book. Hopefully, his students and disciples will carry on his style of sound recording. I will never listen to records the same again.

Not narrated by al

This is probably obvious, but it’s hard to not hear these stories in Al’s very distinct voice.

narrator has a great voice