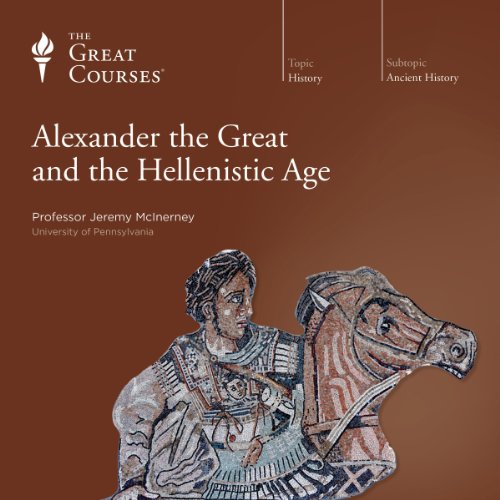 Alexander the Great and the Hellenistic Age

In the opening lectures, you'll explore the enigma of Alexander, son of a brilliant father, yet always at odds with the man whom he succeeded. You'll trace his early campaigns against the Persians and follow him to Egypt, where he was acclaimed as the son of god. You'll then look at his career after this and find in him a blend of greatness and madness as he strove to replace the Persian empire of the Achaemenid dynasty with a new, mixed ruling class of Macedonians and Persians.

From there, you'll delve into the catastrophic period after Alexander's death in 323 B.C., which ushered in a period of catastrophic change as ambitious warlords carved up Alexander's realm into their own separate empires. You'll learn about each of the three kingdoms that resulted: Ptolemaic Egypt, Seleucid Syria, and the Attalid Empire in Asia Minor. Just as important to these lectures are the in-depth discussions of the bounties of Hellenistic culture, which contributed landmark ideas in everything from philosophy (which became more academic), art and architecture (with its excessive, naked emotions), and religion (especially the growing popularity of cult movements). Taken all together, these lectures are an engrossing and riveting journey into ancient history-and the life and times of the man who left an indelible mark on everything that would come after.

This book is a good overview of the rise and conquests of Alexander the Great, his Macedonian Empire, and the Hellenistic empires that took over his conquests after his death. The lectures go from Alexander's rise to the fall of the final Hellenistic kingdom with the conquest of the Ptolemaic dynasty in Egypt by the Romans. The lecturer covers the major kingdoms of the Seleucids in Syria, the Ptolemies in Egypt, and Antigonids in Greece as well as some of the smaller Hellenistic kingdoms to rise during this age. He follows a relatively chronological pattern.

One strength of this professor is his ability to cover not just the political history but also other parts of culture, including social, intellectual, and artistic changes. The only thing that prevents me from giving this series a five star rating is this author's thoroughness. I like listening to history books that leave me feeling like I have had a comprehensive overview on a topic (within reason) and also knowing that the author covered any major well-known sub-topics that deserve attention. Having listened to this lecturer a few times, I know he has a tendency to skip over content in his effort to focus in on specifics or controversies. So for anyone coming to the topic for the first time, there are probably important things he will skip over or not mention. I felt this way particularly in his section on Alexander the Great. There were so many well known events and stories that he skipped or barely talked about, which left me disappointed. So if you are buying this book to learn mainly about Alexander, look elsewhere.

Overall I would recommend this series to anyone interested in the topic. I believe you will learn something and enjoy it!

Excellent Survey of Alexander and his Age

What made the experience of listening to Alexander the Great and the Hellenistic Age the most enjoyable?

The professor did an excellent job presenting both a historical narrative and thematic content. He takes you through the history in a way that give a great feeling on how it evolved, and returns to provide ways to understand why things happened as they did (and he is not afraid to say when we don't know).

What about Professor Jeremy McInerney’s performance did you like?

His style is engaging. The pace of presentation is excellent. There is just enough fun put into the descriptions that it is never dry.

Good Background on the Hellenistic Kingdoms

This was a better course than I anticipated. I had taken Professor McInerney's "Ancient Greek Civilization" course and was left unimpressed so I shied away from this one for way too long. The allure of learning more about the Hellenistic kingdoms was too strong so I caved in and purchased this course and I'm glad I did. Most of his lectures were much more engaging than his other course. He did a good job of covering all aspects of this age.

Admittedly the lectures on social life (poetry, sculpture, religion, etc.) didn't get me jazzed up but that isn't a fault of the professor: I've always been more interested in political histories. And he delivers in that arena: lectures 5-10 and 22-24 are tops. The last three lectures focused on the Hellenistic kingdoms' interactions with Rome and were riveting.

The first four lectures focus on Alexander the Great and the Professor does a good job of getting us thinking: what if Alexander hadn't run out of time and died young? In fact he has a good knack of concluding lectures on a contemplative note (lecture 7 ends on the invention of the discipline of literature criticism in Ptolemaic Egypt and got me thinking: do we have the definitive versions of Shakespeare because the interest in such an activity started in this period?).

My only real negative feedback is the lack of info on the Macedonian empire post Alexander. Its battles with Rome are covered at the course's conclusion but not much else on it for about 200 years.

If you're interested more in Alexander I'd recommend Professor Harl's "Alexander the Great and the Macedonian Empire" course since it delves much deeper into his years but Professor McInerney's course is your choice if you're interest lies with the Hellenistic kingdoms that followed Alexander. Well done.

Everything was terrific except for the lack of chapter titles in the GUI. That is a problem easily solved by audible but for some reason is not done, leaving us to cycle through chapter by chaper, previewing the first 0 seconds while the scholar introduces that lecture.

The Hellen is tic Age after Alexander

Good lecture but the title, Alexander and the Hellen is tic Age is misleading. anyone wanting to know about Alexander should look elsewhere since he is dispensed with midway through the second lecture.

Alexander the Great, just wow. This is a great story, i know its a lecture but it is taught as a story and that is, in my opinion, one of the best ways to teach history. There is so much that is not covered in schools, and A LOT of drama that some people dont think of as a part of the age.

I lot of good material and details that I was missing. Poetic and epic story of a period of such importance for today’s world. It helps you answer questions and understand the background of the history for the next centuries. Loved it.

This is an interesting if heady lecture series. It is easy to get lost as it covers a lot of material. Still good but do a little homework first.

these lectures were very engaging and informative.

these were great. I learned a ton and can't wait to listen to them again.

Well worth your time!

A thoroughly engrossing listen certain to satiate all those lovers of Hellenistic history and culture.

A good introductory series of lectures, not so much for the history of the Hellenistic Age, but for its general themes. The performance is, as usual for TGC, excellent.

Engaging lectures from a favorite professor

Professor McInerney is one of my favorites of the Great Courses history professors. His lecturing style and speaking voice are easy to take in, and I think he does a great job of balancing an overview with in depth explorations of some of the controversies, and asking provocative questions, especially at the end of lectures. If I were using this for homeschooling or similar pursuits, I would start with his course on Ancient Greek Civilization, though this could be a good follow up.

On this course specifically, it is good to note that only the first lectures deal with Alexander himself, and most of the course deals with the Hellenistic world he and his generals spawned. Prof McInerney does a good job (as in the other course referenced above) of balancing political history with Hellenistic, art, literature, and culture. He has a dry sense of humor and the pace of the lectures was well done, always captivating to me.

If using this to homeschool, I note that the outline and reflection questions in the PDF are especially good.

I have listened to this lecture series twice now. It is an excellent introduction to a vital period of antiquity and I recommend it for content and delivery

It started off great. And then collapsed.
Most of the book was covering side issues poorly. I still have little idea of Hellenistic history. He covered literature, poetry, religion and other aspects of culture badly. No context, no history, no chronology. Presumable the culture was different between the beginning and end of the age, but you wouldn't know that from the lecture.
Plus he made lots of mistakes. Kept saying Selucia was in Syria. Suggested Hellanism in Afghanistan and Pakistan ended with Bactria ignoring the whole Graeco Buddhist civilisation. He mentioned Parthia twice, in passing, in the last lecture.
I still don't even have an idea of who all the successor states were let alone their history.