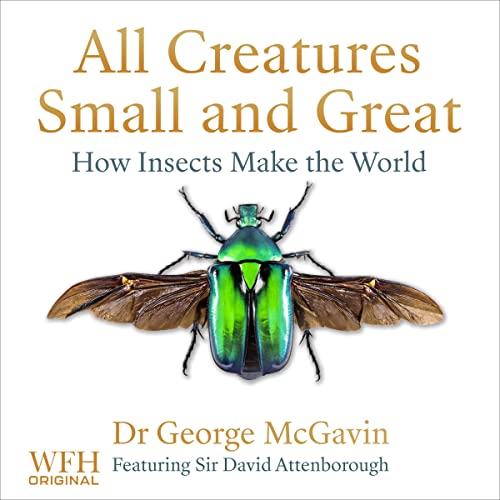 All Creatures Small and Great

If you are at all interested in life on our planet, then you need to know about insects. They are the most successful group of animals ever to have lived on Earth. Making up three quarters of all animal species, insects conquered the planet long ago. They were among the very first animals to appear on land and were the first to take to the air. Their total biomass is at least 10 times that of all humans and our livestock combined.

This world is not ours alone. We are newcomers on a planet made and maintained by insects.

If we are going to appreciate the massive part that insects play in the ecology of our planet we need to understand where they came from and how they became so successful. The survival of insects is key to our own survival.

Join Dr George McGavin on an exciting audio journey to help us understand the fascinating world of insects. Along the way we are transported from bee-filled meadows to the forest floor, following Dr McGavin as he meets national treasures Sir David Attenborough, Alison Steadman and Jane Horrocks and a range of experts such as Professors Stephen Simpson, Helen Roy, Phil Stevenson and Erica McAlister to understand more about their passion for these incredible creatures.

All Creatures Small and Great is an important and timely work to engage people with wildlife, when the world is rapidly losing its biodiversity.

Dr George McGavin is a regular TV and radio presenter for the BBC and others. He is an Honorary Research Associate at the Oxford University Museum of Natural History and a Research Associate of The Department of Zoology of Oxford University as well as a Senior Principal Research Fellow of Imperial College. George’s work has taken him from the tropical forests of Papua New Guinea to the caves of Thailand and from the jungles of Belize to the savannas of Tanzania. Dr George McGavin has several insect species named in his honour and hopes they survive him.

Alison Steadman – Actress and Ambassador for the London Wildlife Trust

Jane Horrocks – Actress and co-host of the podcast Queen Bees

"This audiobook tells the tales of the little things that rule our world. How they came to be here, what they do for us and their uncertain future in a world that doesn’t care about them nearly enough. Hopefully George’s wise words can redress that balance, before it’s too late.” (Steve Backshall MBE, explorer, naturist and TV presenter)

"In this remarkable audiobook George McGavin combines his comprehensive understanding of the biology of insects with his own personal tales and those of experts to explain the extraordinary success of the insects, and to show their fundamental importance to life on earth - past, present and future. This audiobook is a paean to insects and a salutary story for our times. McGavin speaks with a passion that is founded in deep expertise of these small creatures but with an eye to the big picture." (Professor Stephen Simpson)

What listeners say about All Creatures Small and Great

I myself am pursuing this field and this book was great! I particularly like the chapter of parasitic insects!

loved this new format, audio book, pod cast mix. This is one of those books you want to make others listen to. Would love to hear more in this style from George McGavin.
Already listened twice but it will be one that I return to again and again.

This is a well read and totally absorbing account of insects and what they have done for us. It is full off amazing statistics and anecdotes that will open your eyes to the whole world of insects and how we, and every living thing, are connected to them. The format works well, with interviews breaking up the chapters, making it easy to listen to and follow along.

The love of insects is infectious

George narrates brilliantly and conveys incredible passion for his subject matter, if you don't come out a little more intrigued by the smaller inhabitants of this world then I worry for you! The interviews are also fantastic and well worth listening to in full at the end, including a wonderfully touching interview with the great David Attenborough.

Learn to appreciate insects if you can't love them

Helps understand why ecosystems must be considered in every thing we do and why we should protect them.

Fascinating book, lovely voice to listen to, full of so many weird relationships, cool facts and crazy stories about insects and why they are incredible!

I absolutely love this book! All contents based on facts! Narrator couldn't be better.

Be inspired to take a closer look at the smaller things around you and be amazed at their life stories.

Yorkshire does have a coastline Dr George.
Quite a long one.
Surely you know that.

Was all well and good until…

Was going quite well until the last few chapter are literally all static! What a waste of a credit