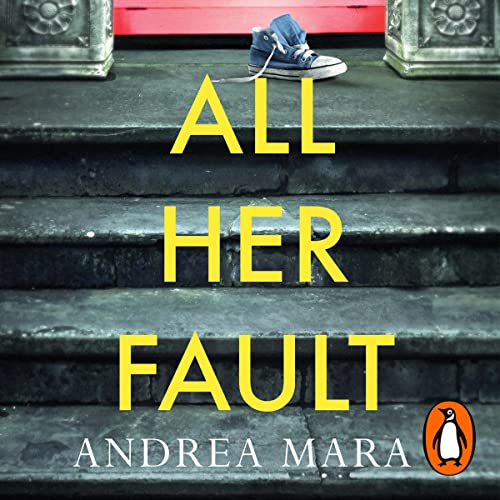 Marissa Irvine arrives at 14 Tudor Grove, expecting to pick up her young son Milo from his first playdate with a boy at his new school. But the woman who answers the door isn't a mother she recognises. She isn't the nanny. She doesn't have Milo. And so begins every parent's worst nightmare.

As news of the disappearance filters through the quiet Dublin suburb and an unexpected suspect is named, whispers start to spread about the women most closely connected to the shocking event. Because only one of them may have taken Milo - but they could all be blamed....

In a community full of secrets, who is really at fault?

"All Her Fault played on my worst fears and kept upping the stakes.... I didn't predict any of the twists and turns." (Sarah Pearse, best-selling author of The Sanatorium)

"A wonderfully twisty nightmare of a domestic thriller." (Emma Curtis, author of Keep Her Quiet)

"A cracking read from a writer at the top of her game - and wow...that twist floored me!" (Claire Allan, author of Her Name Was Rose)

What listeners say about All Her Fault

Ever so well narrated (lovely Irish accent) and a gripping, twisty, involving story.

I loved it and would recommend to anyone who enjoys domestic, psychological thrillers.

A good story with an excellent narrator

I was engaged with this story pretty much all the way through but I did think it got a bit unbelievable at the end. If you are prepared to suspend your disbelief, as I was, I found it an absorbing read and a bit different from the usual detective stuff.

It was very well read ... and I'm usually pretty fussy about narrators!

I liked it enough to look for another book by Andrea Mara but was put off by the reviews of other books by her because of the reviews of the other narrators. A real pity if an author ends up with someone who gets slammed in most of the reviews. Anyway, Jessica Regan was good and I enjoyed listening.

Firstly, the narration is very good. Secondly, overall the book is worth listening to. However, you really have to stick with it as bit takes a very, very long time to get to the plot!

A tale with a twist

Couldn’t stop listening to this. Please, anyone who decides to give up on this one, don’t. The ending is well worth hearing.

All i can say is that there are loads of twist and turns in this story. I enjoyed the narration!

The narrator does a fantastic job of bringing this story to life. And what a story it is! Gripped from the very first page and right to the very last! Brilliant written, just the right amount of explanation without going into too much minute detail and realistic characters that you could easily get to know. I feel this book would make an excellent tv short series.

really enjoyed listening to this book.
great story and the narrator is possibly the best I have ever listened to.

A really good plot with loads of twists. Was gutted when the story finished. Reminded me of big little lies in the character types. If your in to that youl enjoy it. The narrations nice and soothing.

Very well narrated and keeps you in right to the end
Throughly a good listen.

Wonderful book. My first my Andrea Mara and won’t be my last. I have a penchant for Irish writers and of course, Irish Narrators to get it just right as I cannot stand it when accents don’t sound realistic. Jessica Regan is simply brilliant. So cleverly written and as they say “well, I wasn’t expecting THAT”. enough said. No spoilers here.
Thank you Andrea.

really enjoyed this story and the ending fantastic!. Narrated well I didn't want to stop listening

Entertaining from start to finish

All her fault - worth a listen

Loved this book. Kept me guessing the whole way through right to the last page.

Enjoyed listening to this audiobook.

Twists and turns at every corner - great listen. The story keeps you guessing the whole way through and the ending will blow you away - I love being surprised.

Fantastic story, and best narration ever heard on Audible, by Jessica Regan! Searching for further novels by Andrea Mara, I only wish they were also narrated by Jessica Regan.

Great story With a complicated plot

I did enjoy the twists interns in this text, it was the reading which was too fast and the reader sounded breathless most of the time. It was quite distracting and I found myself thinking I wish she would slow down and just more relaxed fashion. Otherwise it was a great story spoilers here but a surprise.

This book had twists and turns right until the end. I'm usually good at working out the plot early on. but not this one. A great read.

Didn’t see the ending coming, was refreshing to listen to a book with a good twist.