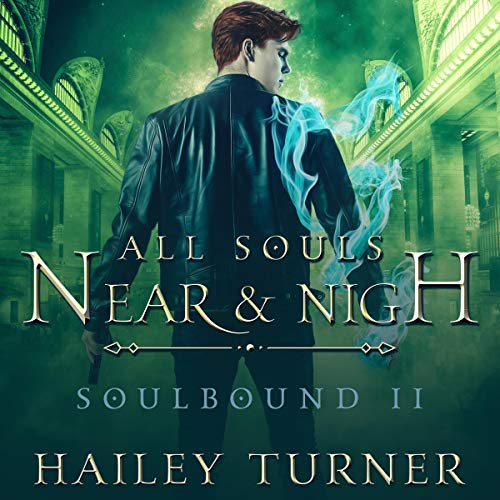 You can’t bargain with death if you’ve already sold your soul.

Special agent Patrick Collins has been reassigned by the supernatural operations agency to New York City. Navigating his new relationship with Jonothon de Vere, the werewolf he’s now soulbound to, is nothing compared to dealing with territorial disputes between the vampires and werecreatures who call the five boroughs home. But the delicate treaties that have kept the preternatural world in check are fraying at the edges, and the fallout is spilling into the mundane world.

Manhattan’s club scene is overrun with the vampire drug known as shine and the subways have become a dumping ground for bodies. When the dead are revealed as missing werecreatures, Patrick and Jono find themselves entangled in pack politics twisted by vampire machinations.

Learning to trust each other comes with problems for both of them, and the gods with a stake in Patrick’s soul debt aren’t finished with him yet. Bound by promises they can’t break, Patrick and Jono must find a way to survive a threat that takes no prisoners and is stalking them relentlessly through the city streets.

Old and new betrayals are coming home to roost but the truth - buried in blood - is more poisonous than the lies being spun. Trying to outrun death is a nightmare - one Patrick may never wake up from.

All Souls Near & Nigh is a 104,000 word m/m urban fantasy with a gay romantic subplot and a HFN ending. It is a direct sequel to A Ferry of Bones & Gold, and listening to the first book in the series would be helpful in enjoying this one. Please see the disclaimer at the beginning of the book for content some listeners may find triggering.

What listeners say about All Souls Near & Nigh

Loved it more than Book 1!

I LOVE this more than the first book! We get to know more about Jono. He's thisclose to being perfect! His relationship with Patrick has gotten more complex with the soul bond, and their small pack. I enjoy the gradual pace of their relationship, where they're discovering how one meant that much to the other. Of course, Jono being a protective growly alpha wolf is just all sort of awesome. I love how Patrick isn't a helpless partner too. His magic is strong, even stronger with Jono's "assistance".

What's more interesting is that I learned a lot more in this book, the Aztec mythology is completely new to me, it fascinated me. The appearance of The Coyote was a great plot twist too.

Vampire turf war. Aztec gods going cray. This book was one crazy ride and I cannot wait for book 3!

Loved it more than Book 1!

I LOVE this more than the first book! We get to know more about Jono. He's thisclose to being perfect! His relationship with Patrick has gotten more complex with the soul bond, and their small pack. I enjoy the gradual pace of their relationship, where they're discovering how one meant that much to the other. Of course, Jono being a protective growly alpha wolf is just all sort of awesome. I love how Patrick isn't a helpless partner too. His magic is strong, even stronger with Jono's "assistance".

What's more interesting is that I learned a lot more in this book, the Aztec mythology is completely new to me, it fascinated me. The appearance of The Coyote was a great plot twist too.

Vampire turf war. Aztec gods going cray. This book was one crazy ride and I cannot wait for book 3!

this series has got me hooked! I love all of the characters and the two main characters (Patrick and Jono) have such an interesting Bond. The new evil in this book was good! it led in well for us to know more about the vampire group of town. The love scenes were steamy and the narrator did a fantastic job. overall well done! Can't wait for the next book!


Hailey Turner has done it again!! This is hands down one of the best series that I’ve read this year and I have read a lot. The second book was just is wonderful as the first; storyline and character development are dead one. Patrick and Jono are just perfect and the supporting characters are great as well. Listen.. trust me!!

Not sure why I waited so long to start this series, but now that I have I love them. Jono and Patrick are fantastic and seeing them grow in each book. Love

I binged the first two books now in a week. I love the story, the world building, just about everything. I especially love the variety of pantheons being involved in the story. Its not just the famous gods from myths, but lesser known ones you might know of but probably not the name of.

This follow-up to the first in the series rocked! Be sure to check out the glossary in the back before reading so you have an idea of the gods involved.

I can’t say anything new that other reviews haven’t already stated much better than I ever could.

If you loved the first, this one will blow you away as the god factions fight for New York!

Another day, another pantheon

Patrick and Jono are back, this time battling a different pantheon of gods, and finding some allies among them. A new character, Wade, comes on board, providing pathos and humor, and some surprising traits and tendencies. And, the pack grows. A solid second outing in this series, with a great performance by Gary Furlong.

I am a devout worshipper in the shrines of both Hailey Turner (author) and Greg Furlong (narrator). The first book in the SoulBound series (A Ferry of Bones and Gold) hooked me into the characters and plot, and this book didn't disappoint. What I enjoy about Hailey Turner's writing is that she doesn't shy away from the dark parts of humanity--but she also doesn't take up residence there. All Souls Near & Nigh introduces a number of Central and South American gods that converge in New York City. Since I didn't have a working knowledge of these deities, I found it easier to follow the plot if I kept a list of who was who and what their motives were.

Patrick and Jono are now tied in ways that are binding and ultimately illegal...something that they can't even divulge to their closest friends. As Patrick builds his relationships with Jono's pack, he finds that his descent into the darkness of gods doesn't have to be alone. As the two souls learn to work, grow, and love together, they face a dark and destructive god that seeks complete domination. Pulled into the dark subway tunnels below the city, they find horrors that could destroy them unless they can learn to be vulnerable.

Hit all the right notes

I love the second book so much can't wait to keep going on with this series!

There's just so much happening in these books, I'm blown away by her world building and I love the "detective"/mystery aspect of it too. ITs a well thought out, unique world, with a fantastic storyline and romance. What more do you want? I really think Gary was the perfect narrator for these! the more I listen to him the more I love him

Hailey is in her own world with her creations and this is no exception. I love Jono and Patrick.

The story follows on from book 1 and the world is detailed, dynamic and at times complicated but Hailey's writing draws you in and enraptures you. So many questions need answering and while on this epic adventure even more questions pop up. I love the back and forth between Jono and Patrick as they navigate their new soulbound and unsanctioned pack they have formed. We learn more about both men and I love that Jono's alpha and powerful nature is finally able to take hold and he is able to take action against the current God Pack alphas.

The story is an intricate web and you never know what's going to happen next. Some great new characters are introduced and we see all the original favorites. I look forward to seeing where Hailey will take us next.

If you're looking for a new world to dive into, with adventure, darkness, steam, and dynamic characters that will keep to on your toes, then look no further than this series. It will enthrall you!!! I'm loving it!

This is such a good story arc, especially if you like ancient mythology.
This picks up from book one. The world building continues with some more gods, vamps and werepeople giving Patrick grief :)
Here we see more of Jono and Patrick's burgeoning relationship; they make a great team, (with a few others), and a great couple.
Loved this action-packed and brilliant sequel.
Gary Furlong is a really good voice for the series - it's hard for me to believe he's the same person that does an awesome Scottish accent! He coneys Patrick's snark and other humourous parts of the story so well. But really, he voices all the different characters (and there are a few), so well, there is no trouble knowing who is speaking at the time.

This is definitely a series I will continue to follow!

I really enjoyed this book.
The story is engaging and had me hooked from the very beginning.
Great writing, great narration, this is a really great audiobook.

This series just gets stronger

Another excellent edition to the series. Patrick and Jono are living together but independent were creatures are turning up dead and between a promise to a vampire, a God pack not doing their job, and several new gods, their lives are never going to be boringly domestic.
A thrilling story with excellent use made of existing gods who in the version of Earth walk among us. Super relationship development, all the old secondary characters as well as some new ones, and just that hint at the end that this story isn't over yet.
Can't wait for the next one.

I love this second book in Hailey Turner's Soulbound series and Gary Furlong continues to do an excellent job of bringing Patrick, Jono and the rest of the packs to life. This time it seems to be South American/Aztec gods that are at the instigators of Patrick's current case. This was another thrilling tale as Patrick and Jono forge their relationship into something even stronger than before. There are a lot of problems within the were-shifter community and they only escalate as hidden truths begin to emerge. Highly recommended for all lovers of Paranormal MM romance thrillers.
I can't wait for book 3!!

I can't waite to listen to the next book ... the narator is perfect keep them coming please

A well written story with and interesting  concept.  The characters are likeable and the narration is very good.

More gory than the first book

I enjoyed this as much as the first . A little more gory than the first . Not enough sex .

Absolutely great, I love the Soulbound series and Gary Furlong is the right narrator for it. I could listen this over and over again.