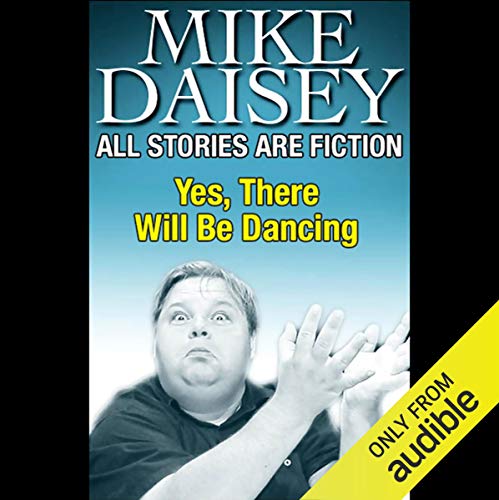 Mike Daisey is a fierce storyteller, one minute hilarious, the next minute sweet, with a fine-tuned ear for digression. He circles in on his uneasy subject matter, closer and closer, until he exposes the raw heart. The New York Times calls him "the master storyteller" and he has been compared to Garrison Keillor, Spalding Gray, and David Sedaris.

In these seven monologues, recorded before live audiences at New York's Performance Space 122, Daisey tells true stories from his life that range from the terrible beauty of his rural Maine hometown, to shipping weapons to the Middle East, to the unintentionally hilarious dangers of defending free speech.

In Yes, There Will Be Dancing, we're talking about dancing girls and the girls that just won't dance, and what makes one profoundly different from the other. Freedom is also on the table; freedom of speech, freedom of action, and the hot water Mike gets into when he finds out what you can and can't say at a micro-Ivy college. Finally, Pentecostal snake charming and the mysterious world of the tent revival come head-to-head with a Baptist girlfriend who won't dance but will read Cosmo.

What listeners say about All Stories Are Fiction

I love listening to Daisey. He's cerebral, witty, crude, and high-minded all at the same time. Bravo!

don't bother, good titol, but that is it

i wasted a credit on this. don't let the titol trik you in to thenking this is good.

Never a dull second in company with Mike Daisey. His idiosyncratic performing gives me a constant feeling of part fear (what is coming next, which tabu is he elaborating in next sentence, who is he belittling?) part extreme curries -- he newer say anything I expect.
Constant surprise ... just makes me eager to hear the next track or hear this album again immediately ... which I did again, and again, and again ... till the battery ran out ....