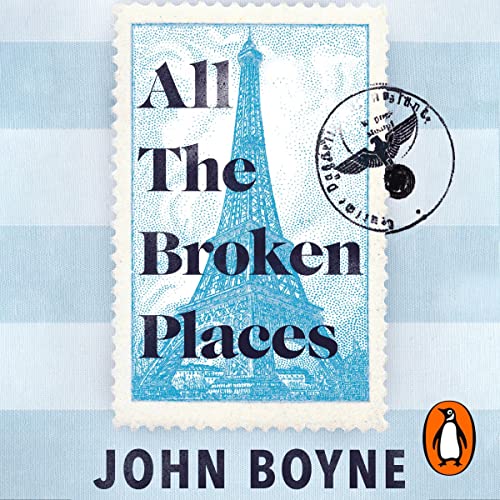 All the Broken Places

1946. Three years after a cataclysmic event that tore their lives apart, a mother and daughter flee Poland for Paris, shame and fear at their heels, not knowing how hard it is to escape your past.

Nearly 80 years later, Gretel Fernsby lives a life that is a far cry from her traumatic childhood. When a couple moves into the flat below her in her London mansion block, it should be nothing more than a momentary inconvenience. However, the appearance of their nine-year-old son, Henry, brings back memories she would rather forget.

Faced with a choice between her own safety and his, Gretel is taken back to a similar crossroads she encountered long ago. Back then, her complicity dishonoured her life, but to interfere now could risk revealing the secrets she has spent a lifetime protecting.

All the Broken Places is John Boyne's masterful sequel to his classic best seller The Boy in the Striped Pyjamas, taking a character from that novel on a journey to a place she never goes—the past. Through her story, he explores the aftermath of the war and the effects of a lifetime of guilt.

What listeners say about All the Broken Places

Thoroughly enjoyed this riveting sequel to The Boy in the Striped Pyjamas. Not unlike the author, I too am fascinated with the Holocaust and how man became monster due to the powerful and systematic brainwashing done by one individual. This book is a worthy sequel and I highly recommend it! Go ahead and invest your time in Gretel's story. You won't regret it!

Totally worth all the hours of keen listening in..

Floored by the choice of words and expressions....the big picture created by the plot is so pertinent!

Refreshing approach to a familiar topic

I found the story very absorbing because of the way it was written, using two different timelines but about the same person. The Author's way of letting you get into that person's head worked very well & topics he covered, especially those to do with male dominance and abused, were sensitively and realistically described. But the story has a big cast all of them interesting and well portrayed. It is a well woven story of history and personal tragedy. Like all good stories I found myself going back when I had finished to review some of the clues I may have missed!

Brilliant book. The simple story taught me so much about the war in a way I’ve never read or thought about it before. Brilliantly written and read so well too. The narrators made it come alive for me.

Live the book. Well read and great story line. I was hocked from beginning to end.

“The boy in the striped pyjamas” is one of my top 10 favourite books and so I was delighted to see a continuation of the story. I was not disappointed. It was supberbly performed which makes any book better. Highly recommended.

Loved the story and the character of Gretel. Always freaked by the horrors of the holocaust and the impact on millions of lives. Never thought of it from the side of the daughter of one of the evil perpetrators.

This book reads like a nazi apologist book. I read two thirds and could not complete it.

I am so bereft that this book has finally finished, and am jealous of those that will come to it and discover its beauty. Strange words, but there is always beauty in John Boynes writing.

You could listen to this book as a one off, however having either read or watched the film The boy in the striped pyjamas you will understand this so much better.

The main Character Gretel is complex and her life teased out through the story like a work of art.

The two narrators for both young and old Gretel are just perfect, they bring the gap to life, between book and cinematography in your minds eye.

I am sure like other others who have finished this book, will find the character of Gretel one to ponder over.
I have no doubt I am not the only one who will think what would they have done in Gretel's shoes after the end of the war, as well as in the latter part of the book.

This will go into my top 10 books of all time.
Enjoy, I highly recommended it.

I don't know where to begin with this book. an absolute work of art. I wish I could start all over again for the first time. These characters will stay with me. An absolute must read.

All The Broken Places

Another completely enthralling tale from this master of storytelling. Can't wait for the next book.

But it doesn’t matter if you haven’t read The Boy in the Striped Pyjamas. The story is beautifully weaved together over different time periods, I particularly enjoyed the narration of the older Gretal

Couldn’t put the book down. An excellent sequel to the “Boy in the striped Pyjamas”. This is Gretel’s story…one of guilt , complicity and grief. John Boyne never disappoints! Narration absolutely brilliant

I loved it! Pacy and gripping, with unexpected twists and turns. Gretle was a v interesting character. Interesting that this was written in our own pandemic, I wonder what guilt will that bring.

All the Broken places

One of best books I have listened to….so we’ll written and not wanting it to end!
The narrators are 2 of the best and really help bring the story to life!

Fantastic story, from start to finish. The Characters stay with you.

Heartbreaking story of grief, guilt and resilience and the human condition.
John is such a wonderfully talented writer.

I think the effects of the Holocaust should be handled with more care than they are in this book. Exploring guilt, be it personal or institutional, is a serious matter. The neatness of the plot was thus annoying. Lastly, the details about Sydney in the 1950s were wrong in just about every way. Lazy research!

Loved The Boy in the Striped PJs so much I had to read this and it didn’t disappoint! Gretel’s perspective young and old is brilliantly written!

Well performed and accurately read (following the text is so much better when listening) John has coupled this sequel to his most popular work in a way that grows the reader’s experience.

equally enthralling and engaging to the end. Capitvated by the the story of her early life and her current situation. a few gd surprises landed at the end.

Wow - could not put this book down

Live this topic and the historical pictures your works created - so many times I thought I understood and then another twist. Looking forward to your other books

Tedious, overwrought and too melodramatic

Writing about the Holocaust has become a money earner for many authors. I really have no problems with that (all writers need audiences) but in All the Broken Places, which is a follow up to The Boy in the Striped Pyjamas I feel the author has overreached and underachieved. The book is broken into three parts, which are all narrated by a woman, Gretel, at different stages of her life; as a teenager; as a young woman in her twenties, and as an old woman in her nineties. The main narrator voice is the elderly woman, who lives in a luxurious apartment in London, having escaped the past and its repercussions. The problem for me is that her section is tedious, mostly judgemental observations about her neighbours, her callow son, and an "invisible" son-in-law (the latter is revealed later). She is not a sociable person but manages to exude an upper class air, perhaps something to do with her coming into money. This is a big gap in the story, just an inheritance it seems. I found her character hard to empathize with even despite the fact that she has regrets about the past and reacts to the nastiness of her London neighbour's bullying, another superficial layer in the pudding that is supposed to connect with the past. Her final act of violent redemption purports to absolve her from the past, when she didn't see or react to the atrocities. An unfortunate cliche.

The other dominant voice comes from Gretel the young girl who is both incredibly worldly and naive about what is happening in the camps, her mind seemingly captured by her pubescent yearnings for a young Nazi. It's unclear when (the actual time) she is speaking and this is another contrivance that the reader has to endure in good faith. Then there is the fill in section of the young woman Gretel who escapes to London via Sydney. There are some quite good parts and Boyne can tell a story well, although this one falls down in his capacity to evoke emotion in the reader and engage with ethical and philosophical issues. Many will disagree I'm sure, and many evidently have been moved. The story has really predictable outcomes, you can see most of it coming, except for the revelation in the final pages that the old lady's neighbour is actually her daughter out of wedlock. But why is this only revealed in the final pages? Contrivances like this get in the way of credibility. Likewise, some of the clever dialogue placed in the mouths of his protagonists doesn't ring true.

A lot of such dialogue would fit well into a clever BBC style TV series but for me it lacks authenticity and creativity. The use of first person is limiting as the reader is always looking through one set of eyes. The two Audible readers make credibility worse; one has a pompous British voice and inflection while the other has an English accent, speaking as the young girl who is German, go figure...

Thought provoking, beautifully written with narration of the highest quality. An absolute must listen/read.

Intriguing story, relevant, objective but not without sympathy, wry wit despite the gravity of the theme. Excellently told and written. Clinton Anderson

I just did not want this book to end.
It’s exploration of all the feelings surrounding the character’s lives, experiences, and inner workings is extraordinary.
The subject matter is handled honestly and sensitively.
The narration is excellent.

I didn’t want this to end. The narrations were fabulous and there were a couple of things I didn’t see coming. Just fabulous!