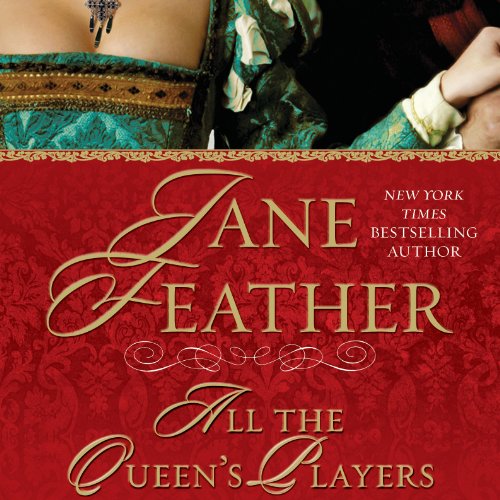 All the Queen's Players

At Queen Elizabeth's palace, intrigue abounds. And when a naive girl with a gift for keen observation enters the court, she can hardly imagine the role she will play in bringing England - - indeed, the whole of Europe - to the brink of war. Nor can she foresee her own journey to the brink of ecstasy and beyond. When she becomes a junior lady of Queen Elizabeth's bedchamber, Rosamund is instructed by her cousin, the brilliant and devious secretary of state Sir Francis Walsingham, to record everything she observes. Her promised reward: a chance at a good marriage. But through her brother Thomas, Rosamund finds herself drawn to the forbidden, rough-and-tumble world of theatre, and to Thomas's friend, the dramatic, impetuous playwright Christopher Marlowe. And then Rosamund meets Will Creighton - a persuasive courtier, poet, and would-be playwright who is the embodiment of an unsuitable match.

The unsanctioned relationship between Rosamund and Will draws the wrath of Elizabeth, who prides herself on being the Virgin Queen. Rosamund is sent in disgrace to a remote castle that holds Elizabeth's cousin Mary Stuart, the imprisoned Queen of Scots. Here, Walsingham expects Rosamund to uncover proof of a plot against Elizabeth. But surely, nothing good can come of putting an artless girl in such close proximity to so many seductive players and deceptive games. Unless, of course, Rosamund can discover an affinity for passion and intrigue herself.

All the Queen's Players transports listeners back to the 16th century, when Mary Queen of Scots has just been executed and a young woman named Rosamund Walsingham joins Queen Elizabeth's palace staff.

Rosalind Ashford performs this historical novel in eloquent, patrician accents that could belong to a noblewoman. It is no surprise that she has recorded several novels by Jane Feather, for her voice is delectably suited for romance in a historical setting. Real figures like Christopher Marlowe and Mary Stuart brush shoulders with the intriguing figments of Feather's imagination. As opposed to a traditional romance, this novel does not rely on a happy ending to send its readers home satisfied.

Interesting, with just enough factual info to make it plausible.
I will listen to it again I am sure!