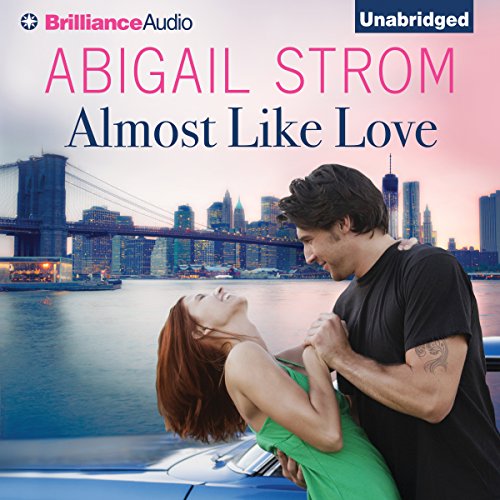 Television writer Kate Meredith is having the day from hell. First, her show was canceled. Then her fiancé left her for another woman. Now, she's courting disaster by flirting with the hard-bodied, tattooed, motorcycle-riding bad boy of her dreams… who also happens to be the man who fired her.

If people had told Ian Hart that he'd be firing Kate in the morning and dancing with her that night, he'd have laughed in their faces. Despite her leggy body, the sweet but geeky redhead isn’t his type. At least, that’s what he thinks before spotting her in a club wearing an outfit that reveals her surprisingly delectable assets.

Before he knows it, Ian becomes Kate’s knight on a shining motorcycle, escorting her home to prevent her from running off with some random guy. But when the night is over, “Little Miss Boring” and her sexy former boss just might turn their oh-so-wrong feelings into something very right.

This didn’t have an OMG moment or mystery or murder or anything like that. It was just a love story. BUT I thoroughly enjoyed it from beginning to end. I think it was because it wasn’t filled with inner thoughts or silly dialogue, like so many other romances are. This was simply about Kate, who was fired from her TV job and her fiancé who broke up with her the same day, and how it affected her. She went from a kinda’ frumpy employee to a leather-skirted, skin-tight bustier wearing, drop dead gorgeous woman, when her ex-boss saw her that same night at a club, and the affect she had on him, and all he went through to get her into his bed.

It was about his 11 year old nephew who lived with him and Ian thought he could make the kid into a baseball player or football player or some other kind of sports player but Jacob was not interested in sports. Jacob was a really good kid; he just didn’t know how to talk to his uncle. Anyway, Kate began to babysit for Jacob and the story moved right along. It was fun and romantic all the way through.

It was really funny when Ian became Spike, Kate’s bad boy boyfriend. What a totally different character he was.

There was some seriously explicit sex in this book, AND some great sexual tension, so if you don’t like sex in your books then you should pass on this. There was also swearing.

This was a free read and free listen and it was an excellent “investment.”

As to the narration: It was Amy McFadden and she is marvelous. Her voices are awesome and she reads with so much emotion: whispering, yelling, laughing, whatever is called for. She’s a terrific narrator.

This was an okay story. I liked Kate more than Ian. The chemistry was okay, and the sex was nicely written. Not erotica not rated G.

The story line was okay. Not much of a plot. It was an easy listen and easy to follow along. There was a lot of dialogue throughout.

As for the narration, I am an Amy McFadden fan so I really enjoyed it. She does the men's voices very well. Everyone gets their own distinct voice. She reads with emotion and has a nice reading voice.

A fun and captivating book that’s difficult to put down. Amy McFadden is amazing with all the voices in this story. Abigail Strom is an expert storyteller - giving the listener an opportunity to leave reality behind and escape into a world of play. Who doesn’t need that from time to time? Thanks, ladies for giving me a play day.

The Voices were a great match. The plot was good and it was executed well. ai liked the idea of making life more bearable with fairytales.

Let me say this before I begin the review. I read and listen to a lot of books. Sometimes I don’t leave reviews if the story is not my thing because I do respect the author’ time and willingness to do something that I can’t do. This is the exception. This book left me numb. I liked neither the H nor the h. I did like the way the kid was written. The story was numbing. The audible was boring without heart. I listen once, couldn’t believe it and tried again....same. Just numbing. The only thing I can say good about this: she wrote a story. I just never want to read or listen to it again.

I absolutely loved this book. The way the characters are described brought their faces to my mind. I enjoyed the journey, got frustrated st certain turns, but Abigail Strom didn't disappoint this sappy romantic. I'm a totally geek and addicted to romance novels, this story just got to me. Btw Amy McFadden is one of my favorite narrators.

A fun read, even though a predictable story line.

A fun read, even though it is a somewhat predictable story line. It is well performed.

I loved the characters, the story was sweet without being sappy and Amy McFadden is a wonderful narrator.

wasn't what i expected.. it was better

I loved this book. it was suprisingly funny & sweet and totally worth a listen

Would Have Been a Cute Love Story

Like best: charming love story
DETESTED: Graphic sex scenes with explicit oral sex
Prefer stories that give a hint of sex but allow the mind to do the work
Would NOT want this around children!!! WHY ARE WE UNABLE TO RECOGNIZE THIS THESE DAYS????? Because we are selfish and want what WE want. To Hell with protecting our young. And, the young are able to read and will read what mom/dad reads.

I read the whole story. And am outraged.

Did Almost Like Love inspire you to do anything?

I won't be buying anything from this author again. I did feel that the narrator did a good job of narrating. This review probably won't get posted since most books these days have the overly graphic sexual descriptions in them. Apparently the publishers prefer this.

Fabulously described as well as wriitten.made you think you were the heroine in the story. Beautiful. Thank you. Abigail Storm. I will definitely purchase more.