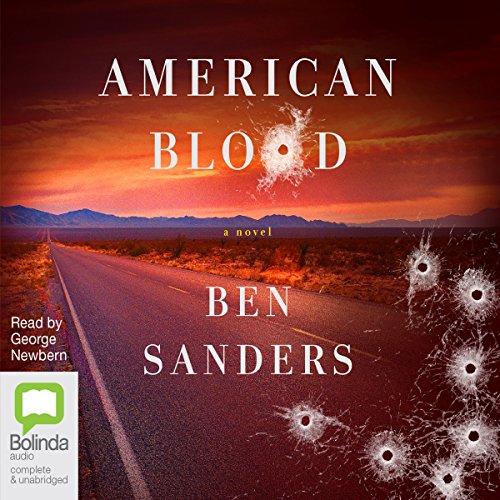 In Ben Sanders' American Blood, a former undercover cop now in witness protection finds himself pulled into the search for a missing woman. With film rights sold to Warner Bros wand Bradley Cooper attached to star and produce, American Blood is sure to be a blockbuster success.

After a botched undercover operation, ex-NYPD officer Marshall Grade is living in witness protection in Santa Fe, New Mexico. Marshall's instructions are to keep a low profile: the mob wants him dead, and a contract killer known as the Dallas Man has been hired to track him down.

Racked with guilt over wrongs committed during his undercover work, and seeking atonement, Marshall investigates the disappearance of a local woman named Alyce Ray.

Members of a drug ring seem to hold clues to Ray's whereabouts, but hunting traffickers is no quiet task. Word of Marshall's efforts spreads, and soon the worst elements of his former life, including the Dallas Man, are coming for him.

What listeners say about American Blood

If you could sum up American Blood in three words, what would they be?

What was one of the most memorable moments of American Blood?

The start was awesome and a great introduction to Marshall and what you can expect from him as a character. Is he cool or what?

What does George Newbern bring to the story that you wouldn’t experience if you had only read the book?

George has an engaging laid back style that really suited the great characters and crackling dialogue.

It made me laugh but mainly I was awed by the quality of the writing, it strongly reminded me of Elmore Leonard which is the biggest compliment I can give.

This book was the best 'find' for me in ages, I believe the author has written 3 other novels so I can't wait to download them when available. Come on Audible, do your stuff!