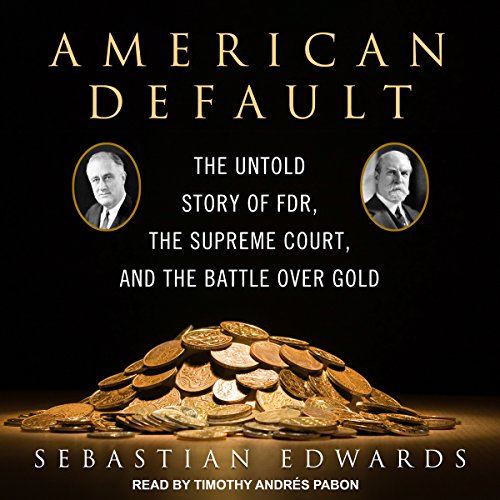 The American economy is strong in large part because nobody believes that America would ever default on its debt. Yet in 1933, Franklin D. Roosevelt did just that, when in a bid to pull the country out of depression, he depreciated the US dollar in relation to gold, effectively annulling all debt contracts. American Default is the story of this forgotten chapter in America's history.

Sebastian Edwards provides a compelling account of the economic and legal drama that embroiled a nation already reeling from global financial collapse. It began on April 5, 1933, when FDR ordered Americans to sell all their gold holdings to the government. This was followed by the abandonment of the gold standard, the unilateral and retroactive rewriting of contracts, and the devaluation of the dollar. Anyone who held public and private debt suddenly saw its value reduced by nearly half, and debtors - including the US government - suddenly owed their creditors far less. Revaluing the dollar imposed a hefty loss on investors and savers, many of them middle-class American families. The banks fought back, and a bitter battle for gold ensued.

In early 1935, the case went to the Supreme Court. Edwards describes FDR's rancorous clashes with conservative Chief Justice Charles Evans Hughes, a confrontation that threatened to finish the New Deal for good - and that led to FDR's attempt to pack the court in 1937.

At a time when several major economies never approached the brink of default or devaluing or recalling currencies, American Default is a timely account of a little-known yet drastic experiment with these policies, the inevitable backlash, and the ultimate result.

What listeners say about American Default

Edwards is a UCLA economics professor. Edwards tells how FDR engineered a default in 1933. FDR did away with the gold standard and made owning private gold illegal. The changes were argued before the Supreme Court.

The book is well written and researched. Edwards made this complex action understandable to the lay person. FDR took the action at the height of the depression. It was looked upon as a desperate measure. The author explains in detail why Roosevelt did what he did and how he did it. I found the discussion about the hearing before the Supreme Court most interesting. Many experts still associate the recovery from the depression directly to the monetary easing of FDR’s gold policies.

The book is nine hours and one minute. Timothy Andres Pabon does an excellent job narrating the book. Pabon is an actor and Spanish & English voice-over artist. Pabon has won the Earphone Award as well as the 2015 Society of Voice Arts and Science Award.

I was startled by this. Details yield insight

This was, for me, a new deeper dive into the nuts and bolts of the New Deal, and the interplay between the branches of the federal government. Some stretches were long in detail, but I don't mind. It was all in service of better insight. I was stunned to learn that the USA had indeed, to my reading, defaulted on its own solemn obligations. And the US Supreme Court's decision blessing this was a mealy-mouthed bit of lawyerly legerdemain if I have ever seen it. And I have seen (and probably practiced) enough to know it when I see it. When is a promise not a promise? When it is too darned inconvenient to keep it, and I still have yet to see the exception to that. When an emergency is perceived, this government can do amazing back-flips and sleights-of-hand to re-paper the whole thing. I expect I haven't seen my last round of that either -- I see it on the horizon yet again now. Creditors despite their best efforts to hedge the risks will be stiffed yet again.
I am gradually getting a bit more accustomed to this narrator who is far from my favorite. My problem with him is, his voice is very soft and smoothed and mid-rangey, and to my old ears, lacks punch. This is especially a problem when there are any ambient noises, as when I am walking outdoors with traffic nearby. He must be cranked up more than any other narrator (of any gender) I can think of.

seems like good content and well written but not best style for audible listening, should have bought book

Great book..provides interesting history with America's relationship with the Gold Standard and how policy during the 1930s are relevant to this day.