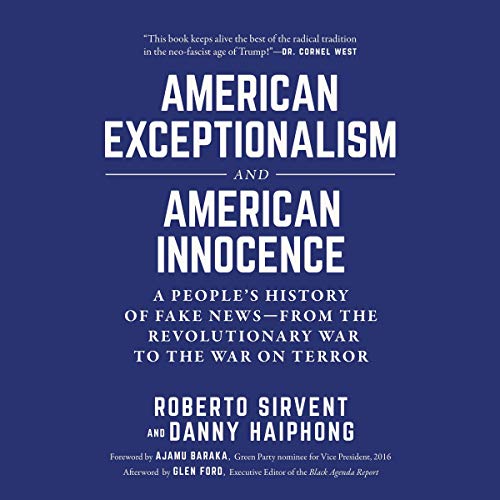 Did the U.S. really “save the world” in World War II? Should black athletes stop protesting and show more gratitude for what America has done for them? Are wars fought to spread freedom and democracy? Or is this all fake news?

American Exceptionalism and American Innocence examines the stories we’re told that lead us to think that the U.S. is a force for good in the world, regardless of slavery, the genocide of indigenous people, and the more than a century’s worth of imperialist war that the U.S. has wrought on the planet.

Roberto Sirvent and Danny Haiphong detail just what Captain America’s shield tells us about the pretensions of U.S. foreign policy, how Angelina Jolie and Bill Gates engage in humanitarian imperialism, and why the Broadway musical Hamilton is a monument to white supremacy.

Challenges everything, however; you're left with the question of whether a permanent change in the situation is possible because of the impossibility of the total system change that is called for in the book. Capitalism isn't the end of history but there should be some care in how to dismantle it. Understanding that the uniquely United States form and it's barbarism is so closely tied with it founding in slavery comes with a new understanding when the role of inherited wealth is explained. When you understand that the bigotry and violence is from the favored group in this country to every other group, you see how concentrated power amongst people with a shared identity is an idea that is unhealthy for the species survival. Any form of government that wishes to sustain itself as a gift to all mankind will have to focus on removing or checking the unhealthy urge that drives our species death instinct. This seems to be much simpler than philosophers have made it, as it is the want to push others beneath us or the singular ego. You see this destructive urge so strong that it destroys all from top to bottom. Might be a bit over simplified, as this is only my first read. The book has thrown many of my previous thoughts into question.

And that’s exactly the point. If you start to listen to this book and you begin to feel offended by the notions put forth by these authors, then you’re in the group of people who needs to hear this message the most. If you decide that the contents of this book are too offensive to your sensibilities, I implore you to continue listening. I did not particularly enjoy this book myself. I even wanted to give up on it a few times, but I’m glad I didn’t because each time after some contemplation and a nights sleep I found myself in agreement with many of the sentiments expressed in these pages. Having said that, I’d recommend this book to anyone!

Fascinating new thoughts that are right in front of our eyes

Thank you for making me think about new ways our government could work and what we take for granted. As in our current climate, if you say anything often enough it becomes the truth even if it isn’t.

The utter arrogance of youth is on public display. It is not that America is unaware of past and present flaws- it is more important to find that Darwinian solution needed for today's environment. Howard Zinn has done a much better job making the alternative stories of history evident, and these fellows attempt to show us the "right" way is impressively both prolix and lightweight.