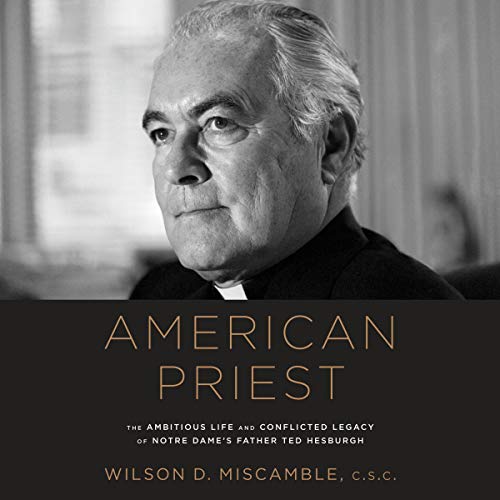 Considered for many decades to be the most influential priest in America, Rev. Theodore M. Hesburgh played what many consider pivotal roles in higher education, the Catholic Church, and national and international affairs. American Priest examines his life and his many and varied engagements - from the university he led for 35 years to his associations with the Vatican and the White House - and evaluates the extent and importance of his legacy.

Author and Notre Dame priest-professor Wilson D. Miscamble tracks how Hesburgh transformed Catholic higher education in the postwar era and explores how he became a much-celebrated voice in America at large. Yet, beyond the hagiography that often surrounds Hesburgh’s legacy lies another more complex and challenging story. What exactly were his contributions to higher learning; what was his involvement in the civil rights movement; and what was the nature of his role as advisor to popes and presidents?

Understanding Hesburgh’s life and work illuminates the journey that the Catholic Church traversed over the second half of the 20th century. Exploring and evaluating Hesburgh’s importance, then, contributes not only to the colorful history of Notre Dame but also to comprehending the American Catholic experience.

“Excellent...the story that Father Miscamble tells is an all-American story - the rise of a Catholic of relatively modest background, close to his immigrant roots, to a place of prominence among the nation’s elite.” (Public Discourse)

"Very few men, clergy or lay, have shaped the American Catholic experience of the last century more powerfully than Notre Dame’s Theodore Hesburgh. Priest, religious, educator, visionary, builder, emissary, celebrity - he inhabited all these roles with exceptional passion, skill, and commensurate ambition. The author captures the complicated genius, and the equally complex times, of Hesburgh the man with exactly the right balance of admiring and critical eye. This is a deep, rich, superbly engaging biography of a force of nature on the post-conciliar American Catholic scene." (Charles J. Chaput, O.F.M. Cap., Archbishop of Philadelphia)

"Fr. Wilson Miscamble is uniquely qualified to tell the story of the legendary Fr. Hesburgh. Balanced, thorough, and gracefully written, this remarkable biography will be of interest to anyone who wants more fully to understand American Catholicism in the 20th century." (Robert Barron, Auxiliary Bishop of Los Angeles and author of To Light a Fire on the Earth)

"An incisive portrait of Theodore Hesburgh as the influential embodiment of one way of being Catholic and American in the last half of the 20th century." (George Weigel, author of The End and the Beginning: Pope John Paul II - The Victory of Freedom, the Last Years, the Legacy)

Fans and detractors, will find something

Fr. Hesburgh's life connects with many of the big names that were major players through his long life. The prestiege in the area of academia and gaining acclaim for Notre Dame are discussed in detail. The perspectives of those who lauded and those who were greatly concerned, by his theology are examined. This is an INCREDIBILY balanced book. If you have an opinion of him as a fan or not; you're likely to find things you like and things you do not in this book.

I know of the legacy of Fr. Hesburgh. The author treats him very fairly. He describes him accurately, warts and all. Fr. Hesburgh was instrumental in taking the Catholic part out of Notre Dame. The story is well told with no detail left out to the point of tediousness. I can appreciate that someone who went to ND would enjoy it however.

Fascinating and judicious history not only of Hesburgh but of the transformation of Catholic higher education. Well told and well read.

Anyone who is interested in Catholic History or Notre Dame will enjoy this book. Very thorough I learned a lot. The author’s analysis of the pros and cons of Hesburghs leadership and it’s impact on catholic education in the US is fair and necessary for us to understand.