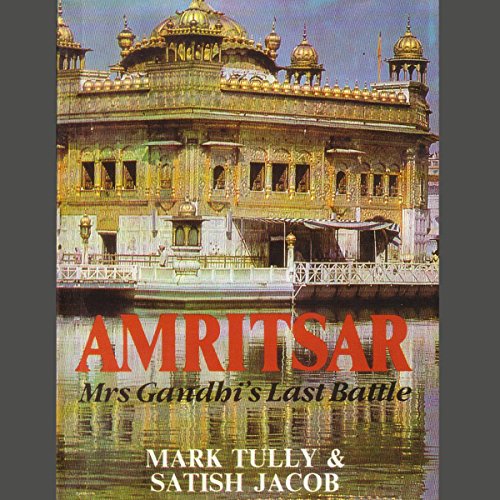 On 5th June 1984, the Indian army began its attack on the complex at Amritsar, which houses the two most sacred shrines. Generals who had pledged to use minimum force and on no account to violate the shrines were not prepared for the fierce and adept resistance they encountered. Having suffered severe casualties, the infantry were driven back, and as a last resort - with approval from Delhi - tanks were ordered in. The Akal Takht was virtually reduced to rubble. It is doubtful if Mrs Gandhi would have initiated Operation Blue Star had she known how bloody and devastating the consequences of that 24-hour conflict would be.

What listeners say about Amritsar

The book is the story of events leading upto Operation Blue Star told with a frank and neutral perspective. The book is well researched and gripping.
The narrator however quotes every actor in what I can describe as a Western attempt to make funny Indian sounding noises. The narrator took no effort to get names and terms right, so Bhajan Lal is called Bajan Lai in many places, Akali Dal is sometimes addressed as Akali Dai (narrator confused between L and I , in the smaller case). Most of all the narrator's attempts to quote Indian characters sound distractingly weird and funny and caricaturizes the characters.

The most authentic and truthful record of events

By far this book seemed most authentic and unbiased narration of the events of terrorism in the Punjab. Since the lead writer is a non-Indian, he is totally free of any prejudices and, because of this very fact, Bhindrawale was also more pleased to give interviews to him than to other Indian reporters, and interacted with him, even during the former's ultimate war with the government machinery.

Anyone who wants to know the truth behind khalistan demand, should read a few or, many books, but this should be first on his list.

The narration is awful. such a poor choice, he has sleep-read the book with pathetic pronunciation. The essence of the important topic got diluted to a greater extent due to poor narration.

Insight into Politics played by Congress in Punjab

Very poor pronounciation of Indian and Hindi words. A different narrator should have been chosen .

What made up to Op Bluestar

A book which details not only the Operation bluestar but the backdrop against which it happened. The rising of the characters and the build up to the day of Operation bluestar. It's a very well as detailed book which has account being spoken of both sides.
Indeed it focuses on the last battle of Indira Gandhi.

An excellent first hand coverage of events leading up to the Operation Bluestar.The narration was equally engrossing.

The book provides entire context and prelude to causes and subtle undercurrents which led to tragedy of 1984. As usual, excellent narration by Homer.

We can excuse Tully for pronunciations - but not the narrator... Shabby work. I can appreciate the voice modulations to make the narrative interesting. But how is Bhajan Lal addressed as Bhajan Le? Too many such instances. I don't think there is derth of Indians who can do excellent narration in English.

The book's material is really good and unbiased. But the narration is very poor, especially the "quoted" comments where the narrator is trying to mimic the accent. It started getting on my nerves after a while. It would have been nice see a normal dialogue rather than dramatized version of the comments.

Couldn't get through the first few chapters even. Horrible narration and accents attributed to characters takes the serious subject matter to situational comedy territory. Stay away and stick to the real book. That's what I'm going to have to do.

Book is awesome. Amongst very few on Indian politics. It gives a good chronological order of the events. But the narration is disappointing. Especially the enacting effort Indian accent is terrible. It's unfair to use such accent.

Great book the production is poor

This is a great book. The reader is also great. The most annoying was trying to mimic the person’s voice in a native accent. I recommend hiring an Indian English speaker instead who at least would be able to pronounce some of the native words correctly. Forcing him to mimic the sound and accent felt borderline racial.