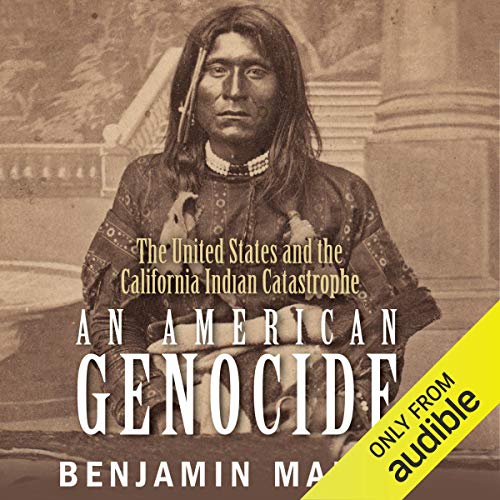 Between 1846 and 1873, California's Indian population plunged from perhaps 150,000 to 30,000. Benjamin Madley is the first historian to uncover the full extent of the slaughter, the involvement of state and federal officials, the taxpayer dollars that supported the violence, indigenous resistance, who did the killing, and why the killings ended. This deeply researched book is a comprehensive and chilling history of an American genocide.

Madley describes precontact California and precursors to the genocide before explaining how the Gold Rush stirred vigilante violence against California Indians. He narrates the rise of a state-sanctioned killing machine and the broad societal, judicial, and political support for genocide. Many participated: vigilantes, volunteer state militiamen, US Army soldiers, US congressmen, California governors, and others. The state and federal governments spent at least $1.7 million on campaigns against California Indians. Besides evaluating government officials' culpability, Madley considers why the slaughter constituted genocide and how other possible genocides within and beyond the Americas might be investigated using the methods presented in this groundbreaking book.

Not for the faint at heart

What made the experience of listening to An American Genocide the most enjoyable?

The history - I read and listened to the book via Kindle. Amazing. I think the attention to detail is incredible here - Madley names the names, dates, and places of so many of the hundreds of massacres the thousands of emigrant gold miners of 1849-1870 and others perpetrated on the Native California Indians. He calls the 25- to 30-year span of virtually uncontrolled delegalizing, trafficking and killing a genocide (using UN definitions) for good reason.

What was one of the most memorable moments of An American Genocide?

When I realized what the "killing machine" was actually comprised of was "memorable." There were the local volunteers (newcomer miners and ranchers) electing like-minded congressmen who got funding to support the militias which were established and the money often refunded by the Federal government. Meanwhile the newspapers encouraged the carnage. Whole tribes were "exterminated" (the word used in primary sources) because a cow was supposedly stolen.

What does Fajer Al-Kaisi bring to the story that you wouldn’t experience if you just read the book?

Al-Kaisi gave life to all the data. I read parts in the Kindle version, too, but mostly I listened as one horror was piled on the next added to another atrocity and all piling up into a genocide.

Not for the faint of heart but absolutely vital for anyone looking to piece together the history of California in terms of the Indians.

it's sad to know what my ancestors went through but very educational would reccomend to others.

A must have book

Yes, this history must be known worldwide.

What was one of the most memorable moments of An American Genocide?

The whole book is traumatizing but must be a told

I don't know. Movies should be made.

This history needs to be told. The European still call Indian wars what is nothing more than genocide and deliberate extermination of a people so they could build the USA. The whole of the America continent is a blood bath of indigenous peoples. Accept the truth.

I've struggled so much with listening to the narrative Manley develops in this essential book for anyone who cares about the soul of America. The volume of data provided on the slaughter of Native peoples is overwhelming. And, as I listened in California, walking to and from my office on the grounds of the former mission where I work, wave after wave of it rolled into my consciousness to a degree that was often hard to take. The tsunami of that fact-based reality is a key part of Manley's argument: there was just SO MUCH KILLING with so much government endorsement and active facilitation. Hearing of case upon case of killing justified by the flimsiest of rationales--this at a time when children are being ripped from their parents' arms at US borders and put in what amount to concentration camps--it's a lot to take in. Attending to all of it, resisting the urge to tune it out, to turn it off, is the basis of the moral argument Manley develops. If you want to just stop listening because it was so unimaginably awful, but didn't, you've got the point. If you keep listening, attending to parallels in the discussion about reparation for descendants of African slaves, to the humanitarian crisis on the southern border, to the destruction and degradation of Native lands in Standing Rock, well, now you're beginning to do the work that comes next. All of it is painful, and I can't imagine how Manley got himself through researching and writing this book. My only quibble with the book itself would be that I would have liked to have known more about religious justifications for the Native American extermination in California, particularly as many of the stolen children were taken into church-sponsored schools often funded by the government. I'm looking at some of that material myself now. Beyond that, the audiobook wobbles only on the often weird pronunciations of the narrator, particularly of local place names, some of which I looked up to see if I'd been mispronouncing them or if the pronunciations had changed dramatically over the past century. While that sometimes was the case, it wasn't often. Otherwise, this is an important work that is well worth the wrenching experience of listening all the way through.

A tragic but necessary history book

This is certainly a very important book that most Californians should read. By any measure, the state of California in the United States government practiced genocide against the tribes of California. Important California names like Stanford in Fremont are stained with the blood of Native Americans. A difficult history to listen to, but necessary in these times.

Loved it. A truth so painful yet necessary to have told. You will never think of California the same afterwards or many of its big names and founders, like Fremont, Hastings, and Stanford, many of whom were worse than the worst Nazis murders and butchers. We are a shame as long as we do so little to right this gross injustice and suppression of the truth. -s.

it was so great. california needs to admit it's past and make things right with all.

Long overdue true story of The American Indian genocide. We live on their lands now, we are their inheritants.

oh so much death it was hard to listen to

it was a good book, but it was beyond depressing and difficult to finish. I recommend all people read this as it is vital to know the true history of the United States

I wanted to cry!

very well written and narrated history!... we owe the Indians a LOT! while it was inevitable that Russia or Mexico would have taken the Indian land and probably did it the same way we did, I just cannot comprehend the savaragy of the whites! thank God for Abraham Lincoln to begin human rights for all man! just cannot believe it took so long... 😭

Totally absorbing audible presentation. An must listen to production. Enlightening and harrowing in nature, the demise of Indian culture in California is brought to the listeners ears. You will be shocked or indeed appalled about the story; but it is something non should shy away from. Highly Recommended.

I listened to all evening this and found much of the story distressing if factual!