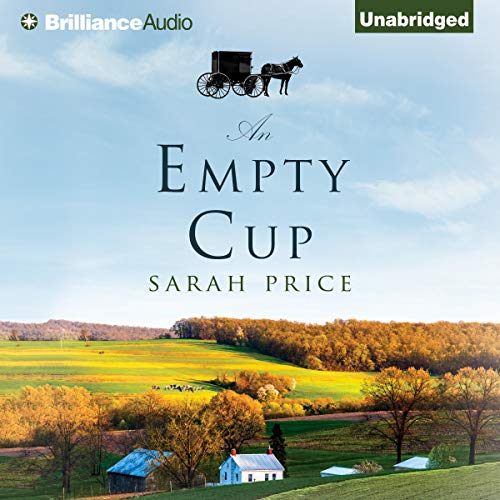 Amish woman Rosanna Zook lost her self-confidence within the confines of a loveless and abusive marriage. In the years spent quietly dealing with her burdens and dutifully caring for others, she forgot her sense of self and ability to feel. But after her first husband's untimely death, she gets a second chance with Reuben Troyer, a godly man who welcomes Rosanna and her two children into his life.

Despite the love and respect she finds in her new marriage, Rosanna soon learns that juggling the demands of her family and church community is more than she can handle. When Rosanna becomes ill, she is forced to confront a hard truth: One empty cup cannot fill another. For a woman who has spent her life giving, will Rosanna finally be able to let go and receive?

What listeners say about An Empty Cup

This was a very heartwarming book about Roseanne, an Amish woman who gave so much of herself and wanted nothing in return. She put all of her trust in God and strived towards being a dutiful wife and mother even with the mental abuse from her husband she still remained true to her vows. After a sudden and milk illness hit er unexpectedly, she had to learn how to say, "No," to the many demands that were pressed upon her from her community. But with the help of a wise woman, she learned how to stop doing so much for others while neglecting her own needs.

This was a terrific read with an adorable and likable character. I was in the story the entire time. I also took a liking to the variety of terms and traditions within the Amish community.

The audio version was clear and the emphasis on particular words, phrases, and scenes was right on point and placed me in the story from beginning to end. I would recommend this book to anyone who wants to escape for a while from their stressful life and learn a bit about the Amish community in the process.

***If this review helped you a wee bit, let Amazon know with the Helpful click. Thanks.***

Life is a balancing act.

Interesting insight into an Amish community with a good message about give and take. Plot is a little predictable but it takes a few twists highlighting serious subjects like depression and attempted suicide. I enjoyed the Christian worldview and the scripture that was shared. It was inspiring.

This story portrays very common scenarios and tells the truth about the guidance we're given in God's Word. The narrator is good; pleasant voice and does the characters well with appropriate emotion.

Enjoyed the storyline. You'd think those with simple lives would struggle with anxiety and depression. Good relational insight. Easy to follow

The story line is very predictable. Story is based on one character and her real weak mess. I am sure many women caved under dominant husbands. But the 22 chapters went on like a broken record.

Kudos to the author for addressing mental health issues. I especially appreciated the support received by Rosannas husband.

I did not expect this to be a story on depression, on how important it is to learn the gentle rhythms of give and take in healthy relationships. This sort of story is sorely needed.

The second chapter began rather jarringly, but the rest of the story flowed smoothly.

The main character’s slow descent into burnout and depression was very well done, as well as the redemption of her sanity.

The book is full of interesting, well rounded characters. We get to see many different ways people choose to deal with the stresses of life and how that works out for them.

I highly recommend the story, especially for women who feel like they are burning out trying and failing to care for those they love.

I enjoyed listening to an empty cup very much. It was great company during COVID-19 quarantine by myself. I could relate very much to it because it seemed like my life was following along with her daily work. I am wondering if there will be a Nother story coming along like this. I would definitely read another one. It was very interesting the description of all the characters was brought to life very well. I would highly recommend An Empty Cup.

The book An Empty Cup was a interesting story to read. It takes places in the Amish country and tells of a family life.

A lesson in a story. Almost like a parable.

This was a very well written story with many actual factual locations. A pretty good description of Amish as well. The only drawback was the narrator using incorrect pronunciation of many place names.

so true to life

Not really a second chance

more like, back into the frying pan as her second husband was a pain too!

An Amish woman loses her first alcoholic husband and remarries a more respectable man. He gradually turns out not to be that great a catch either and she sinks into a deep depression. So yeah, bit of a downer this one.