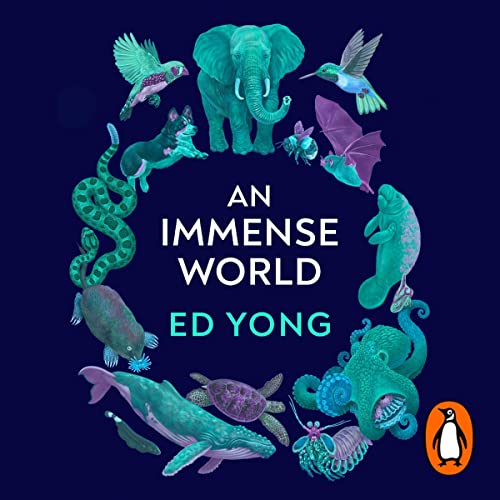 Humans have three or four colour-detecting cones in their retinas. Mantis shrimp have 16. In fact, their eyes seem to have more in common with satellite technology than with biological vision as we currently understand it. They have evolved to track movement with an acuity no other species can match by processing raw information; they may not 'see', in the human sense, at all.

Marine molluscs called chitons have eyes that are made of stone. Scorpions appear to see with their entire bodies. It isn't only vision that differs from species to species—some animals also have senses we lack entirely. Knifefish navigate by electrical charge.

An Immense World will take us on an insider's tour of the natural world by describing the biology, physics and chemistry animals use to perceive it. We may lack some of their senses, but our own super-sense lies in our ability to understand theirs. And in the face of the largest extinction event since the meteor that killed the dinosaurs, our only hope of saving other species is bound up with our ability to see what they see, and feel what they feel.

What listeners say about An Immense World

Excellent insights into an unknown world

The book manages to delve deep into the various sensory perceptions of different classes of animals, birds, insects, mammals etc.

Provided fantastic and unimaginable insights, bringing some obvious concepts and some unknown, to the reader / listener.

Extremely well compiled, narrated and is a worthy collectible…

After a chapter or so of listening as a 'background' I returned to the beginning and restarted, giving the book my full attention.
All of it is worth absorbing; all fascinating, quenching curiosity of the natural world.
Narration by author is usually what I go for - works best in non-fiction - and Yong's narration has not disappointed - if is extraordinary.
I have followed Yong in the Atlantic for a few years, and love his immaculate writing style and his depth pf research, but An Immense World is something else - it is A Masterpiece!

Everyone should read this

For the sake of our planet. I think I will listen to it again once more.

I loved this audio book. it was read superbly, it contains some amazing facts, and it conveys an overarching respect and appreciation for nature and its creatures.

This book is beautifully researched and written and opened my eyes to worlds and depths I never before imagined. Most recommended!

An amazing book that really expanded my world

An amazing book tye has made me see and think about the world differently. Highly recommend. Does need some concentration as it’s rich with information.

This book has forever altered my understanding of the creatures that live around me. Even the senses I thought I understood become dazzling in the words or Ed Yong, I can’t recommend enough.

Thought provoking journey through other creatures Umvelt, The “way they sense their world” perfectly read by the author whose obvious excitement and awe of other species
Senses is infectious. I loved this book and I think you will too.

Absolutely awesome book that broadens the awareness of the world around us. I am forever changed and will read it over again

Stuck for words big enough to express my joy and awe at what I have learnt from this book. More please!! It is incredible.

A truly fascinating and well-written dive into the sensory world of animals. Definitely worth buying.

This book has changed my perspective on the animal world and made me look at them in a new light (of hear them in a new sound?!). I feel like I have been blind to so much of what goes on in their world, and the process of starting to understand what I've been missing is completely thrilling.
I've not stopped talking about it!

This book is packed with information and is entertaining to boot. Makes me more interested in the world around me. Everyone should listen to this.

I have a new favourite book.

For around 15 years I have been working with humans and non-human animals with varying sense perceptions. In an Immense World, Ed Yong, brings together years of research and lived experience to share the sense perceptions of the humanimals with which we share this immense world.