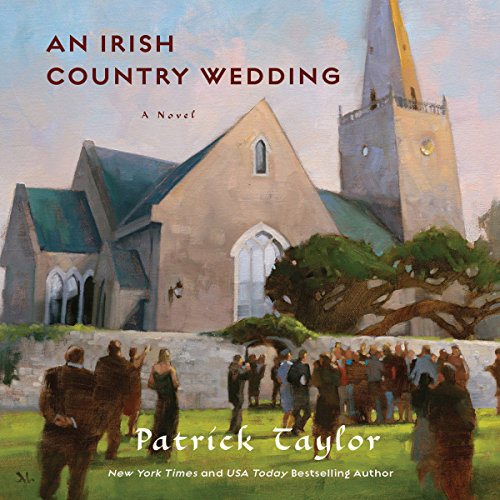 Love is in the air in the colourful Ulster village of Ballybucklebo, where Dr. Fingal Flahertie O’Reilly has finally proposed to the darling of his youth, Kitty O’Hallorhan. There’s a wedding to be planned, but before O’Reilly can make it to the altar, he and his young colleague, Barry Laverty, M.B., must deal with the usual round of eccentric patients—and crises both large and small.

Being a G.P. in a place like Ballybucklebo often means more than simply splinting broken bones and tending to aches and pains. It can also mean helping a struggling young couple acquire their first home, clearing the name of a cat accused of preying on a neighbor’s prize pigeons, and encouraging a bright working-class girl who dreams of someday becoming a doctor herself. And, if you’re Barry Laverty, still smarting from a painful breakup, there might even be a chance for a new romance with a lovely school teacher, if her passionate political convictions don’t get in the way.

Much has changed in Ballybucklebo, and bigger changes are in store, but the lives and practices of these Irish country doctors remain as captivating and irresistible as ever.

What listeners say about An Irish Country Wedding

I've purchased most of the books in this series and am always amazed at how entertaining the series can be. Theses are wonderful, wholesome, charming and at times funny stories about life in a small village in Ireland as seen through the eyes of it's two doctors.

The narrater made the stories come alive. His Irish brogue was perfect and at the same time understandable.

Very interesting and relaxing you will become part of Balleybucklebo

I love this series by Patrick Taylor. Highly recommend this for any one any time

What did you love best about An Irish Country Wedding?

As always these books are heart warming. Finally Dr. O'Reilly is married and the prospects look good for Kinky.

The entire story line, the characterizations, as you listen you can actually picture them in all in your mind.

What does John Keating bring to the story that you wouldn’t experience if you just read the book?

The wonderful Irish accent he brings to the reading of the story.

The last chapter as Barry reminisces about his year spent in Ballybucklebeau. I hope this is not the last book.

I certainly hope this is not the last book.

Didn't want this book to end. But please don't read it without first reading the others in the series.

Delightful narrator, lovely Irish accents (I didn't realise how many Australian expressions were from the many Irish settlers). Humane, friendly, heartwarming. Medically informed. Escaping into the small village of Ballybucklebo where people genuinely care for each other. Wonderful characters. Highly recommended.

I have read all of the Irish Country series, and have enjoyed each one. No, they are not great literature, but each one makes you feel like you are right there in this little Northern Ireland town in the 1960's.

As I have spent several weeks right in that area, and know how beautiful and delightful a place it is, I feel like I've gone back for a visit each time I read another installment. Taylor makes the characters believable and it is also interesting to see where medicine was at that time, compared to now. Sometimes I wish there were still more doctors who used common sense and could know their patients as the two doctors in these books did.

John Keating is a fave of mine. I gave these 4 stars, but would really give them more of a 4.3 or so. I needed a chill out book last week, and this was perfect. Keating brings the characters to life, and that makes this and all the series more fun than just reading them conventionally.

A delightful visit to Ballybucklebo Ireland

This has turned out to be one of my favorite series. The story is what I call a feel good story, that leaves you with a smile on your face and the desire to visit Ireland. In this book Dr Fingal O'Reilly and Kitty O'Hallorhan are getting married. Dr.Barry Laverty is leaving the village to get more training to specialize in Ob-Gyn. The life in the village continues and the doctors heal the sick and help to solve peoples problems. The author informs one of little bits of information about Ireland that might be difficult to learn in the normal course of visiting Ireland. Such as, the people from county Cork put SO at the end of each sentence. In this book there is a bit of ancient history of the Ulster area. I do hope that Patrick Taylor will continue this series. I read the first two books in large print hard back but when I switch to audiobooks it was so much more enjoyable. John Keating with his Irish accent is great and he can pronounce the words I was trying figure out how to pronounce. I had to keep reminding myself the story takes place in the late 1950 and early 1960's and that was the state of art of medicine at the time and of course no cell phones etc. Great book and series I am sure you will enjoy it as a break from your busy day.

I loved it and hope to visit Ireland VERY soon!!! can't wait to read the next in this series.

Another Delightful Time in Ballybuckleboo!

John Keating is my favorite narrator of my favorite author's series. Currently I am recuperating from knee replacement surgery and 3 of Keating 's narrations have been better than my meds! Can't wait to start the next book! :0)

Awesome in the Series!

A wonderful tale in the Series. The Characters are so loveable and fun. It was great to have Fingal get Married.

The Characters are becoming family

As I listen to the sagas of this little village, and the knitting of Dr O Reilly's magic touch with patients/friends....I too feel apart of the Ballybucklebo family. Marriage, countship, Kinky's illness, Colin's pet dilemma...all are heartwarming. Love the reader !!

This book makes me happy

I love listening to all the books in this series, narrated so beautifully by John Keating with the Irish lilt and individual character accents. While the stories are not terribly complicated, one tends to be drawn in. This makes it easy to forget one's own problems, while at the same time allowing one to appreciate the difficulties of the average person not that many decades ago. Thank you, Patrick Taylor, and please continue writing about this wonderful village - Ballybucklebo.

A happy listener from Canada