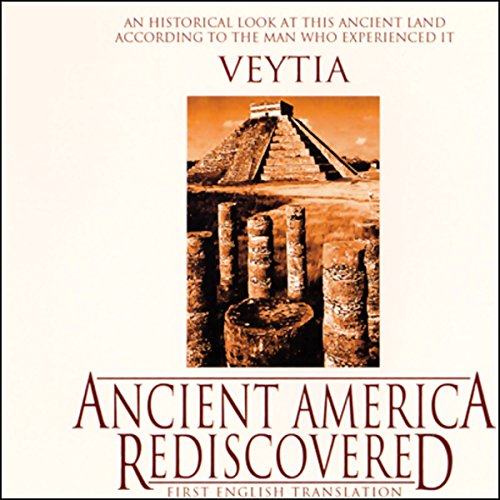 This is the first English translation of a portion of Historia Antigua de Mexico, written originally in Spanish by celebrated Mexican historian Mariano Veytia. He relates the history, astronomy, and religious practices he discovered from the charts, diagrams, and paintings of the Native Americans. In addition, he presents an account of America'a first settlers, who left from the biblical Tower of Babel at the time of the confusion of tongues.
(P)2006 Big Happy Family, LLC
Mormon Ancient History Americas
Show More Show Less

Alot of interesting information and theories. It seemed to be written from a religeous point of veiw but I found it to be intreging.

The first thing I feel people should know is that this book was written in about 1720-1778 by Mariano Veytia, it was translated in 2000 by Donald W. Hemingway and W. David Hemingway. This threw me off greatly when I first started listening cause audible says it was released in 11-27-06, thus stupid me thought this would be a relatively recent understanding of the Ancient Americas, but it's not.

This reading is supper religious as you would probably expect from a religious historian in the 1700's. The beginning is dedicated to the breadth of his research and why people should listen and believe what he says, and what he writes about is based on a multitude of resources and understandings that he has gathered. This takes up a significant portion of the book, about 45 min. Yet again this is not out of the norm for a book written in the 1700's.

While all these are normal there was no initial understanding when listening to this book that this was actually written in the 1700s and not 2006 when I was first listening to it, thus I personally was very confused until I did a bit of digging to figure out why someone in 2006 would want to write as if they are from before the 1900s, and that's when I found the true date of this book.

As this is more a historical look of what people thought about the Americas in the 1700s you should expect information that is no longer true, such as the extent in which America is depicted as being in land mass, and you might find it interesting that there are small insights that were floating in the 1700s that people now take for granted, such as the idea that the Irish made it to the Americas before Columbus (change Irish to Vikings and you got some modern history there). The rest is a lot of religious gobildy-gook so take that for what it is.

My Favorite Quote:
“… Francisco Lope de Gomara [an ancient historian] … discusses the customs, laws and rites that the Indians observed at the time of the arrival of the Spanish, … with respect to his ancient history he writes very succinctly and superficially, but with much judgment, as can be seen in that work … It is not lacking in errors, for there is rarely a history without errors, except in sacred history.”

Overall an interesting listen, If you are into this kind of thing.

Would you try another book from Mariano Veytia and/or Marvin Payne?

seems to be just a small part of a much larger book, starts and end abruptly,