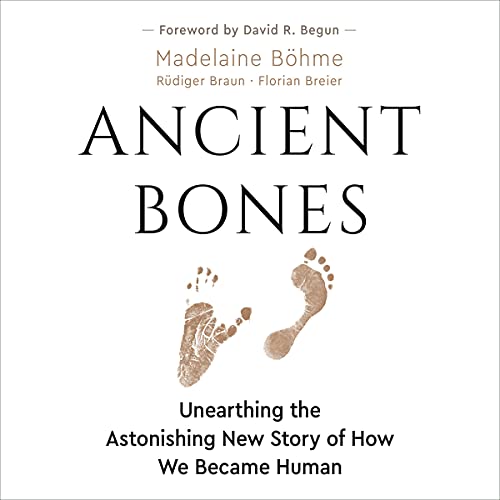 Fans of Sapiens will love this “fascinating forensic inquiry into human origins” (Kirkus), where a renowned paleontologist takes listeners behind the scenes of one of the most groundbreaking investigations into the origins of humankind.

Africa has long been considered the cradle of life - where life and humans evolved - but somewhere west of Munich, Germany, paleoclimatologist and paleontologist Madelaine Böhme and her team make a discovery that is beyond anything they ever imagined: the 12-million-year-old bones of an ancient ape - Danuvius guggenmos - which makes headlines around the world and defies prevailing theories of human history and where human life began.

Ancient Bones takes listeners behind the scenes of this incredible discovery and invites listeners to explore theories concerning early hominins to prehistoric humans, how climate and the environment were driving forces behind evolution, and how pivotal evolutionary steps - from our ability to communicate using complex speech to walking upright and using our hands to create - were necessary for humans to evolve and live on this planet. Blending science, history, and mystery, Ancient Bones explores a fascinating new chapter in the origins of humanity and, above all, brings clarity to what makes humans human.

With prose that comes across like a thrilling detective story, this exciting exploration of humanity will prove an indispensable listen for those who are endlessly curious about who we are, how we got here, and what comes next.

“Readable and thought-provoking. Madelaine Böhme is an iconoclast whose fossil discoveries have challenged long-standing ideas on the origins of the ancestors of apes and humans.” (Steve Brusatte, New York Times best-selling author of The Rise and Fall of the Dinosaurs)

“An impressive introduction to the burgeoning recalibration of paleoanthropology.” (Kirkus Reviews, starred review)

What listeners say about Ancient Bones

Right, and that’s why I love Audible. Not only can I listen to a book as I commute to work but it’s so easy to hit the rewind icon on my Apple Watch—which I do often. Indeed, I evaluate any given book by how many times I hit the rewind, which was something I did quit a lot of while ‘studying’ Ancient Bones. The number of rewind tells me to what degree I like any given book. Notice that I used the word ‘STUDYING’ instead of ‘listening’— why? Simple, I want to learn about our human history—the most fascinating topic in my library. I recall taking physical anthropology in 1963, a long time ago but I’ve never let go of wanting to know just where and how we arrived. Sure thing, I knew my parents and grandparents and even my great grandmother, but that’s as far as I can go. Think about it, my grandmother had a grandmother and it goes all the way back, millions and indeed, billions of years back—I’m grateful to each and every generation for their endurance, trials, and sacrifices. If they had not struggled to survive then I wouldn’t be here today. Now, I think this is worth my attention—thanks to ever generation.

In Ancient Bones, Madelaine Böhme delivers a fascinating and enjoyable journey through Hominid history. Dr. Böhme expands on the traditional story of human evolution through her work as both a paleontologist and a paleoclimatology with particular insight into her work involving Danuvius guggenmosi. All of the concepts are well explained and anyone who has an interest in human evolution, paleontology, or anthropology should find something here to enjoy.

Aimée Ayotte does a fine job narrating the story but her performance likely wouldn't keep someone listening if they don't already find the book interesting and enjoyable. I did find her reading to be a bit on the slower side even with the 1.3x speed I regularly listen at. I have no real complaints with her performance and the speed is easy enough to adjust and shouldn't be a problem for most listeners who know their own preferences.

Overall I found Ancient Bones to be an enjoyable listen and well worth the credit however, at the time of this review, Audible is missing the accompanying PDF so you might need to do some searching to fully appreciate the book. ​

!I though it was informative well presented but for me requires a second reading

Fun, interesting and up to date with new information. No complaints on the narration. The book is divided up into comfortably short chapters. Maybe half an hour on average?

Though the narrator did an excellent job, this is one book that should probably be read on text or perhaps listened to elsewhere. I say that because the author frequently references images and figures. And with every one the narrator makes a point to mention that the images are accompanied with the audiobook. This was very irksome as Audible did not, in fact, include them.