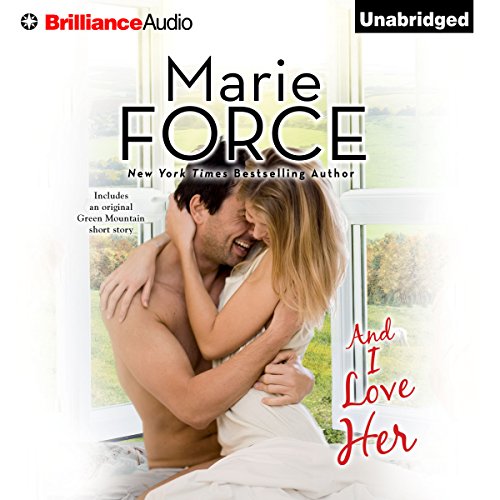 And I Love Her

A Green Mountain Romance from the New York Times bestselling author of I Saw Her Standing There.

As the oldest of the ten Abbott siblings, Hunter prides himself on his ability to solve other people's problems, but now he has a problem of his own - how to convince the woman of his dreams that his love is for keeps.

As the chief financial officer, Hunter Abbott manages the family's various business interests while fixing things for the people he loves. But the one thing he can't fix is his undeniable attraction to Megan Kane. Instead Hunter is prepared to do whatever it takes to show Megan that he's the man for her.

Megan's sister rocks her with the news that she and her husband are moving overseas, leaving Megan truly alone. With her sister - and her job at the diner - going away, Megan finds herself leaning on the sexy, button-down accountant who isn't afraid to lay it all on the line for her. But Megan has watched too many people she loves leave her. Can she risk her heart on Hunter?

What listeners say about And I Love Her

As usual, this is another winning book full of happiness, tears and most of all love. I can't wait for the next book in this series

Really enyed the novel. The bantering and interaction was great. The reaction of Megan was well written.

I have so enjoyed this series and can't wait for the next book to arrive.

Marie Force's series are wonderful summer companions! And because I live in Florida, they are my all year round friends!!! Keep writing please!!

inspires you to believe in true love..and that men like Hunter really exist out there. ..great story!!

What was the story? Was there a story?

If you could sum up And I Love Her in three words, what would they be?

Too Much Sex! At least half the story were sex scenes. If that's what you want then this is for you. I'm still trying to figure out if there really was a story beyond great sex.

I like stories that go beyond the bedroom. Call me a prude but I'd prefer the descriptions end at the bedroom door. That said I'll return to my favorites, Debbie Maccomber, Robyn Carr, and Susan Mallary.

What does Christina Traister bring to the story that you wouldn’t experience if you just read the book?

I enjoyed Christina's reading. Listening to a book vs reading allows me to experience a lot more emotion.

Yes, quit reading the series. This one was a waste of time.

This is the 4th book in the series. After reading the 3rd book, I posted a review which said I was done with this series and Marie Force. I should have listened to myself. I'm really done with both this time. Unfortunately I fell in love with the Abott family and the town. I would really like to finish the series, but .... as already stated way too much sex for me. In the prior three books there was a semblance of a plot. Not so here. I was hoping I'd like Megan (the lead female character) after the listening to the book. But nope, still don't like her.

Marie Force does it again! Love this series. Can't wait for the next installment to see what happens. Maybe even Elmer can find a girlfriend.

Quite frankly, Megan was my least favorite character in the series so I approached this book with reservations. But even though I thought it was going to take a backhoe to dig Megan out of her cranky, erascible pit, Marie Force had me loving her personality and witty comebacks which were a perfect counterpoint to Hunter. Ms. Force is the 'Dialog Diva' and several of Megan and Hunter's verbal exchanges cracked me up.

When it comes to exchanges of a more intimate nature, well grab a cold one ladies, because this one REALLY STEAMS UP. Who knew the buttoned down CFO had so much locked down under such tight control until he let go.

GREAT LISTEN. Christina Traister does an exceptional job with this series, but did a particularly good job capturing Hunter's serious, intensity and deep love for Megan.

I enjoyed all the Green Mountain Books and love hearing the ongoing stories about the Abbott family, but AND I LOVE HER has become my favorite!

I love this family . This is another winner for Marie Force. Can't wait for the next story.

I absolutely love this series! I feel like I'm right there in the story! I love that Marie works humor into the siblings relationships but still conveys a deep and protective love.

Wow another fabulous story in this ongoing wonderful series. Awesome characters and a heartfelt storyline. Can’t wait to read the next book now. Amazing narration too.