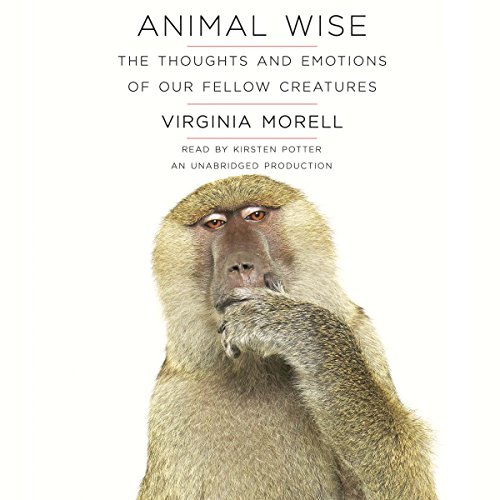 Noted science writer Virginia Morell explores the frontiers of research on animal cognition and emotion, offering a surprising and moving exploration into the hearts and minds of wild and domesticated animals.

Did you know that ants teach, earthworms make decisions, rats love to be tickled, and chimps grieve? Did you know that some dogs have thousand-word vocabularies and that birds practice songs in their sleep? That crows improvise tools, blue jays plan ahead, and moths remember living as caterpillars?

Animal Wise takes us on a dazzling odyssey into the inner world of animals, from ants to elephants to wolves, and from sharp-shooting archerfish to pods of dolphins that rumble like rival street gangs. With 30 years of experience covering the sciences, Morell uses her formidable gifts as a story-teller to transport us to field sites and laboratories around the world, introducing us to pioneering animal-cognition researchers and their surprisingly intelligent and sensitive subjects. She explores how this rapidly evolving, controversial field has only recently overturned old notions about why animals behave as they do. She probes the moral and ethical dilemmas of recognizing that even "lesser animals" have cognitive abilities such as memory, feelings, personality, and self-awareness - traits that many in the 20th century felt were unique to human beings.

By standing behaviorism on its head, Morell brings the world of nature brilliantly alive in a nuanced, deeply felt appreciation of the human-animal bond, and she shares her admiration for the men and women who have simultaneously chipped away at what we think makes us distinctive while offering a glimpse of where our own abilities come from.

"After you read this book, you will be convinced that many different animal species have true thoughts and emotions. You will take a journey to the center of the animal mind." (Temple Grandin, author of Animals in Translation and Animals Make Us Human)
"From real-estate appraising ants and wife-beating parrots to laughing rats, grieving elephants, and dogs that play Simon Says, Virginia Morell’s Animal Wise is a fascinating and intellectually sweeping overview of the new science of animal cognition. With Morell’s unusual ability to capture the passion and humanity of these scientists, this extraordinary book is an impressive treatment of animal minds and a must read for anyone who has ever wondered what is going on in the heads of the creatures we share our world with." (Hal Herzog, author of Some We Love, Some We Hate, Some We Eat)
"Why is it that until very recently, many scientists claimed that animals can’t think? Every pet owner knows better, and Virginia Morell is our champion. But she’s not going on guesswork and opinion - Animal Wise is thoroughly and meticulously researched. And it’s a page-turner - a window to the natural world that will change the way we view other species. We place ourselves at the top of the evolutionary ladder. Of course we do. We invented the ladder. In her marvelous book, Morell displays the folly of this viewpoint. Animal Wise is fabulous!" (Elizabeth Marshall Thomas, author of The Hidden Life of Dogs)

What listeners say about Animal Wise

That is what Mark Bekoff, author of Wild Justice, calls the twenty-first century, anticipating a growing awareness of animal cognition and emotion, along with a growing awareness of how close we really are in relation to animals and the way they live. Like Bekoff's Wild Justice and Dale Peterson's The Moral Lives Of Animals, Morell uses a wonderful combination of anecdote, science and philosophy to weave together a plausible argument that animals not only think and feel more like we do than we before believed, but that they, too, possess their own forms of morality, which, in most instances, very much resemble ours as well. Anyone who has spent a lot of time around animals knows that it is true, but we are just now fighting our way out of Descartes' famous proclamation that animals are simply "elaborate machines" without REAL thoughts and feelings. It is good to see a growing body of literature that, at last, contradicts that and publicizes what a lot of us knew by simple observation and interactions with our fellow beings.

Beautiful insights into the minds of animals

What did you love best about Animal Wise?

I was tempted to say I was blown away by this sensitive and informative book about the inner minds and emotions of animals. But I'm not really. For anyone who loves and respects animals, this is more a confirmation of what we may have suspected than a surprise.

Virginia Morrell does a wonderful job of explaining some of the ways humans have been discouraged from believing in the intelligence and emotional connections of animals. She then goes on to explore case after case where people (scientists usually) who have spent great time studying certain kinds of animals have learned about what creative, intelligent and interactive lives they have. (Think Jane Goodall, but with every species...insects, birds, fish, mammals...)

This book may leave hunters, lab experimenters, even maybe just meat eaters re-thinking some of their positions. But whether that happens or not, it is undeniable that the book will leave you feeling amazed and far more respectful of our other animal kin.

Kirsten Potter does an excellent job of narrating, but I did find myself wondering what it might have been like if the author had read it herself. I am sure I will listen to this over and over.

Other Ways of Knowing

If you could sum up Animal Wise in three words, what would they be?

What other book might you compare Animal Wise to and why?

Mary Austin's The Land of Little Rain for its close perception of nature especially from the view of the nonhuman.

Which character – as performed by Kirsten Potter – was your favorite?

I liked the chapter on elephants very much.

Yes, it is that engaging. And each chapter reports on different animals, so it holds your interest.

This is a very good introduction to recent developments in the study of animal cognition.

I finished this book in two days! It was a greatly informative and educational peek into the science behind our animal kin...not just dogs but primates, dolphins, whales, even ants.

While I wriggled a little bit at some of the lab experiments, the outcomes are enlightening. This is a great book for anyone considering a career in dog training or just looking to understand how our counterparts communicate, feel and survive despite not communicating verbally.

Although I love anecdotes that provide glimpses into the presumed thoughts and feelings of animals, I also like to see what comparative psychologists, primatologists, ethnologists, and others have to say as well. Animal Wise does an excellent job of providing a survey about what published studies by these researchers have to say. Although it would be easy for such a survey to become dry and academic, Morell is an accomplished science writer (think Nat Geo) who does a good job of making this information interesting and accessible to a lay audience. Along the way she tours what is known about animals you are likely to be somewhat familiar with - you know, dogs, chimpanzees, elephants, and porpoises, but she also covers animals and creatures you are probably less familiar with, like ants, fish, and birds (especially crows!).

What surprised me the most about reading Animal Wise is that Morell explores the philosophical and moral implications of animal intelligence: To the extent that there is evolutionary continuity at a physical level, what does it mean that there is also intellectual and emotional continuity between humans and other animals? What if any bearing do these issues have on how we treat and how we eat these animals?

If books of this type are of interest, check out "Our Inner Ape" by Frans de Waal.

If you Wonder how anómala feel or think, this is a great choice for you. It will go through diferent species and how they feel and comunicate among themselves and with us.

It was such a beautiful book that really makes one appericate all forms of life. I will and have already recommended this book to anyone willing to listen. I truly believe that if humans start to value animals more as intelligent creatures many of the problems we have today may cease to exist.

I loved hearing the research about so many animal species. Fascinating, respectful and enjoyable.

I suspected as much

If you could sum up Animal Wise in three words, what would they be?

I knew animals are smart, I did not know that they have as many abilities as humans have.

Really enjoyed this book; learned a lot!
Great narration! Did a amazing job making you feel for the animals

Mostly boring, but perhaps my fault.

This book is saturated with results of research that went on for years, even decades. and rich anecdotes telling remarkable experiences with animals, that being said, the book never captured me fully. Perhaps I interpreted the title as something less "sciency", perhaps wrongly so. To conclude, this book is for wild animals enthusiasts, or anyone who wants to know more on animals, but mostly enthusiasts.

loved the book would definitely recommend it.

lots of good examples and points to a lot of people whose papers I'm going to read.

Anybody can learn something new from this

Would you consider the audio edition of Animal Wise to be better than the print version?

I don't know but I enjoyed the audio very much.

Maybe the fish because usually I don't care for them, but she uncovered really interesting facts about them.

Which character – as performed by Kirsten Potter – was your favourite?

No, science is best in small doses.

It's really very varied so whatever animal you like will probably be covered but you will also expand your horizons.

Excellent book, brings together many fascinating studies covering all sorts of animals from ants to elephants, parrots to dolphins. If you want to know more about the inner workings of animals from the field of animal cognition but are looking to avoid lots of technical jargon I would highly recommend this book. A good balance of the science and the authors (and the scientists she works with) own personal views on things; well written, and well read.

Beautifully narrated and easy to follow. Includes interesting quotes, studies, stories and opinions from many well known experts in the fields of animal behaviour and emotions. 10 chapters cover the range of animal groups, focusing on one animal and types of insight per chapter. With so much research fairly recent, we are at the dawn of discovering all these great insights. This book brings together all the findings you've heard about in documentaries, you-tube, magazines and museum exhibitions. If you like animals you'll really enjoy it. It wouldn't offend either if your indifferent to some of the animals talked about. It's written in a way that's very personable and down-to-earth.
If Darwin were around still today, I think he would push for this book to be on the national curriculum. He wrote a similar (but stuffier version) 100 years ago. The world wasn't ready for it then.