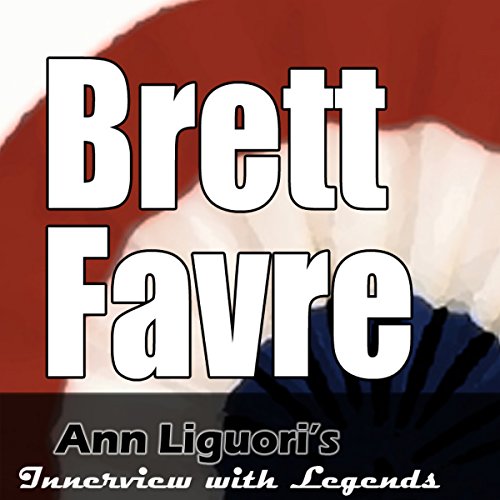 In this installment of her interview series expert sports broadcaster Liguori speaks with famed quarterback Brett Favre. Born in a small town in Mississippi, Favre began playing football in the eighth grade. Later on Favre survived a dire car accident during his senior year in college. Six weeks after this accident Favre led his team to victory in a game. Favre’s notable resilience proved useful in his career but even more in his personal life. InAnn Liguori's Audio Hall of Fame: Brett Favre, Favre discusses his achievements and the ups and downs on life on and off the football field. Liguori understands the art of football, but she is also well-rounded enough as an interviewer to steer the conversation off the field.

Brett Lorenzo Favre was the starting quarterback for the Green Bay Packers between the 1992 and 2007 NFL seasons and for the New York Jets in 2008. Favre started at the quarterback position for The University of Southern Mississippi for four years before being selected in the second round of the 1991 NFL Draft by the Atlanta Falcons. After one season with the Falcons, Favre was traded to the Green Bay Packers on February 10, 1992, for the 19th pick in the 1992 NFL Draft. He became the Packers' starting quarterback in the fourth game of the 1992 NFL season, starting every game from then until his retirement in 2008.

In 2008, Favre came out of retirement, was traded to the New York Jets, and continued his consecutive start streak.On February 11th, 2009, Favre told the New York Jets that he was retiring for good. He is recognized as one of the greatest quarterbacks in American football history. Favre is the first player to win the AP MVP three times (1995 - 97) in NFL history.

At Pattysburg Country Club, Ann Liguori, award-winning luminary in sports broadcasting with a celebrated career that spans two decades, catches up with Favre. Favre discusses candidly some of the issues he has had to overcome, both in his career and personally. Favre also shares about his "second" career: golf and his love and passion for the game.

What listeners say about Ann Liguori's Audio Hall of Fame