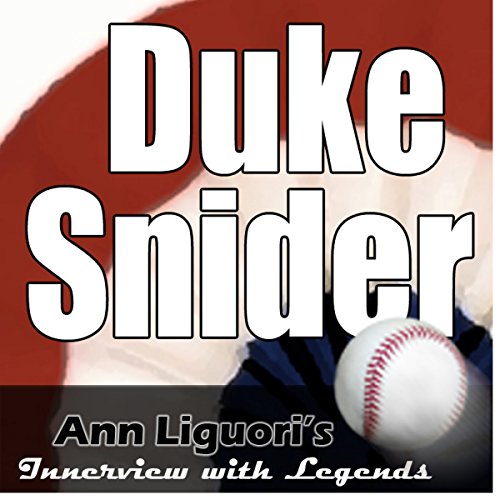 Duke Snider played centerfield with the Brooklyn and Los Angeles Dodgers until 1962. From 1947 to 1956, Brooklyn ruled the National League, but that wasn't the only item in the news. Snider had a front row seat to the controversy surrounding the brilliant career of Jackie Robinson - they started in the major leagues on the same day.

In this candid interview Snider also talks with warmth and humility about the day the Brooklyn Dodgers moved to Los Angeles. Snider is interviewed here by Ann Liguori, award-winning luminary in sports broadcasting with a celebrated career that spans two decades. Liguori has interviewed some of the most legendary sports personalities, drawing out their success stories, their opinions on a variety of issues, and their love of the game.

One of the top sports interviewers in the game, Ann Liguori, interviews the "The Silver Fox", "The Duke of Flatbush", baseball Hall of Famer, Duke Snider. This charming interview, recorded when the great Dodger was 69 years old, ranges pleasurably over the golden age of Dodger baseball from Jackie Robinson to the 1959 move from Brooklyn to Los Angeles, and of course to Snider’s two World Series wins against the New York Yankees and the Chicago White Sox, respectively. Along the way, Snider muses on subjects that will be considered gems to any baseball enthusiast: his 1964 plate appearance against his old teammate, Sandy Koufax, and why good hitters have lower I.Q.s than good pitchers.