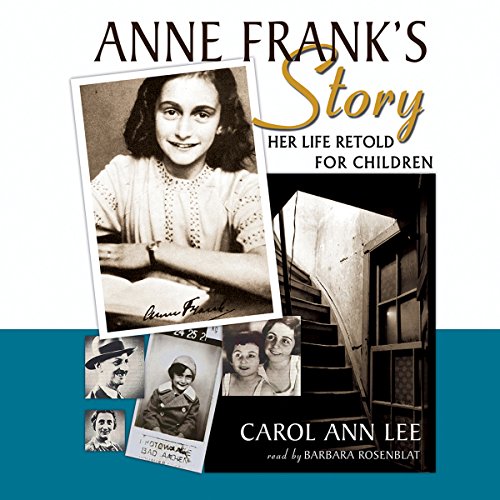 The Diary of Anne Frank is read and loved by children throughout the world. Yet few of those readers know what life was really like for the young Jewish girl before and after she wrote her famous diary.

Written in a lively yet sympathetic style, Anne Frank’s Story follows Anne Frank from her birth in Germany and her happy childhood in Amsterdam through the years she and her family spent in hiding from the Nazis, to her imprisonment and eventual death in the concentration camps.

“This book gives children the opportunity to meet Anne Frank, to know her story and her destiny, and to learn that discrimination in every form is evil and inhuman.” - Buddy Elias, first cousin to Anne Frank

Carol Ann Lee was born in Yorkshire, England, in 1969. She began work on a biography of Anne Frank when she was 18 years old, but she put it aside while she attended college at Manchester University. In 1998 her book Roses from the Earth: The Biography of Anne Frank was published to critical acclaim. Anne Frank’s Story is her second book. Carol Ann Lee is married and lives in Amsterdam.

“Marvelously read by Barbara Rosenblat. There are a few instances where her voice catches due to the emotional nature of the text she is reading.” ( Large Print Reviews)

The story is definitely geared towards children. I listened to it, but some of the content I wanted to hear about was edited out. But Anne Frank was a remarkable child whose story needs to be told.

I love Anna Frank books this one is the best one so far that I have reared.

May we never repeat this history...

My first encounter with Anne Frank was when I watched the movie as a child. All I remembered was that she and her family were hiding from the Nazis.

I really enjoyed listening to this book. It made me sad to realise that so many people were lost, so many voices, because of one man’s hatred!

It is my sincere hope that her story will prevent this from happening again.

Thank you to the narrator too.

I listened to this in the car on the way home from a Scout camp with 4 boys aged 8-10. They were enthralled, curious and eager to discuss. They are now keen to read the diary for themselves. Beautifully narrated. I listened at x1.3 so we could get through it on the journey and it still sounded great

The Narrator was absolutely amazing

The Narrator’s voice was absolutely amazing and smooth making it easy, and pleasurable to listen to. I truly enjoyed the content of the book and how it was very descriptive to the point of feeling like I was in certain scenes in person! Very good performance and story!

I love Anne frank her story is so interesting to me and I would recommend this to almost anyone. Carol Ann Lee writes it perfectly where it doesn’t sound a s frightening as it was. Thank you so much for this book!

Great book . Its so sad and emotional after you listen to it you want to now more

Wonderfully written and narrated!
Listed in one sitting with my 9 year old prior to reading Ann Frank's Diary itself. The book gave detailed, concise and captivating account of Anne's extraordinary life without taking away from future reading of the diary. Really helped set the scene and provide understanding and context for my 9 year old of Anne's life.
Highly recommend for all ages!

If you have an interest in the Holocaust then this is the book for you. Set out with a view of helping to teach the tragic time of the holocaust in a great way for children to understand. Written by an author who herself is involved with the Anne Frank House, this is a great way to get a basic amount of information on Anne Frank.