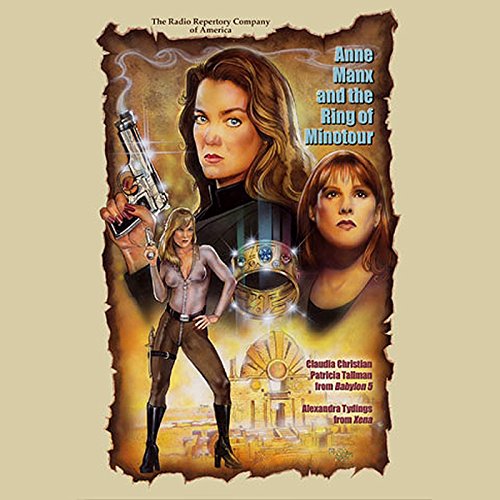 Anne Manx and the Ring of Minotour

The eagerly-awaited sequel to Lives of the Cat hurls us into a web of intrigue swirling around an ancient temple, a mysterious ring - and a legend that offers the chance for someone to actually become a god. Jean Richmond's murderous lunge for ultimate power forces Anne Manx to risk her own soul for revenge.

This gripping SF thriller stars Claudia Christian (from TV's Babylon 5) as the hard-driving future detective, B5's Pat Tallman as the evil Richmond, and Alexandra Tydings ("Aphrodite" on Xena) as Charlotte Miller, with co-star Richard Fish as both Jack and Rory. Magnificent performances, escalating suspense, and slam-bang action will hold you riveted! Larry Weiner's brilliant new script, the intense reality of the sound production, and a superb original score by Angelo Panetta, combine to bring you whole new worlds of adventure on the biggest screen of all - your imagination.

What listeners say about Anne Manx and the Ring of Minotour

This episode is even better than the last one and it was great. Fun characters, wonderful actors, unexpected twists and even the sound effects are well done. Anne Manx is completely addictive. Listen to it more than once to catch all the zingers.