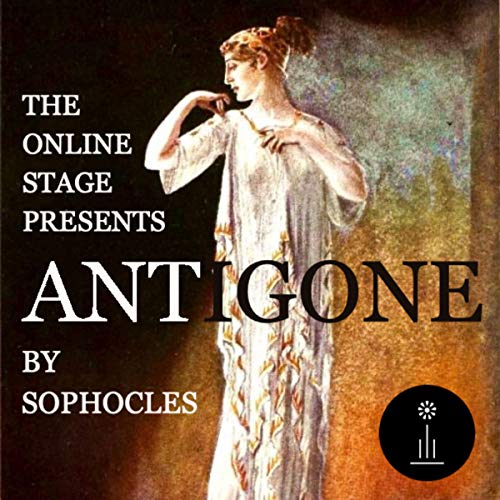 Antigone by Sophocles. Translated by Sir George Young. Presented by the Online Stage.

Sophocles (497 BC-406 BC), Aeschylus, and Euripides formed a trio of ancient Greek tragedians whose works represent the foundation of the Western tradition of classic drama. Of the more than 100 plays written by Sophocles, seven have survived to the present day. Perhaps the most famous of these are the three that are now known as the Theban plays: Oedipus the King, Oedipus at Colonus, and Antigone.

After the death of their father, Oedipus, Antigone and Ismene return to Thebes. The ruler is their unyielding uncle by marriage, Creon, who assumed command after the death of the sons of Oedipus, Eteocles, and Polynices in a fratricidal struggle to take control of the city. Creon has the body of one brother buried with full civic honors but forbids the burial of the body of the other, whom he regards as a traitor. Antigone's challenge to Creon's decree, which she considers unjust, results in the extinction of the family line of Oedipus.

What listeners say about Antigone by Sophocles

One of the worst voice actor performances I've ever heard. A bag of rocks has better range. Totally worthless production.

The full cast recording was the big draw for this version, but the uneven sound quality and inconsistency of performers made for a disappointing listen. If you're an educator looking for a recording of Antigone you can use with your students, you should skip this one.

As a drama, I would definitely recommend only using this as a 'refresher'. Some of the performances were excellent and others seemed a bit off-putting (Creon's pronouncements in particular had a far creakier voice than I felt suited the character - especially compared to Tiresias' speech!), but all in all a good 'review' if you've already experienced Antigone in a different format.

this book is a good read. I loved it and I will recommend it to anyone

The audio recording is very poor. Voices sound like they have a head cold. One voice speaks with a lisp...which would be okay excepting that it is the voice of a strong male character.

I returned the book after listening to less than 5 minutes.

I cringed and laughed while listening to this - a disservice to George Young's poetic translation.