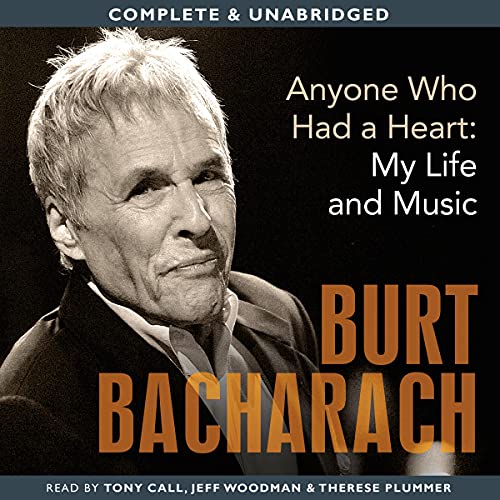 Anyone Who Had a Heart: My Life and Music

Burt Bacharach is one of the most celebrated and legendary songwriters of the 20th century. Throughout his 60-year career he has worked with artists from Dionne Warwick to Dr Dre, Marlene Dietrich to Elvis Costello.

Anyone Who Had a Heart is the story of one of the greatest songwriters of all time. It traces, for the first time in his own words, the life and times of the man who created the music that has become the soundtrack for the lives of his millions of devoted fans all over the world.

What listeners say about Anyone Who Had a Heart: My Life and Music

Loved this behind the scenes of composing BB’s music. Another egomaniacal jerk but love the talent and the book. Narration v good too. I promptly then bought BB’s ex wife Carole Bayer Sager autobiography on Audible which she narrates and is also marvellous.

really enjoyed the book and the narrator was outstanding. definitely recommended for fans of Burt Bacharach.

This is an excellent autobiography of the great Burt Bacharach, his songs, his wives - and the odd tragedy. Really well delivered, with contributions from family and friends, which work very well. Highly recommended!

What the world needs is a better ending

I really enjoyed this revealing autobiography. But the beginning - of how Bacharach started out - is better than the end, which doesn't have as many good anecdotes.