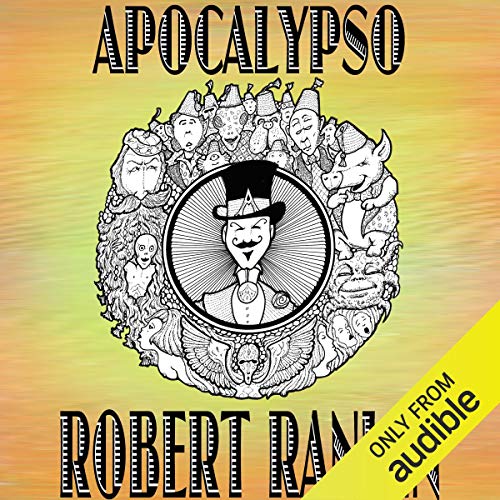 Look out there's a monster coming

The Ministry of Serendipity control everything. They run this world from their secret underground lair beneath Mornington Crescent Underground Station in London. And when they learn of the crashed alien spacecraft lying at the bottom of the Pacific Ocean, they send out their crack team of paranormal investigators to recover it. The Fortean superstars that are Sir John Rimmer, Dr Harney, and the psychic youth himself, Mr Danbury Collins.

Secret dossiers suggest that this spacecraft contains a mad alien that was once worshipped as a god because of its terrible telepathic powers. And that it is even now lying in suspended animation, awaiting its time to rise again and rule the world once more. Danbury's special senses tell him that the best thing to do would be to nuke the creature now before it wreaks havoc on Mankind. But does anyone listen? No!

Porrig has been left something in his uncle's will. It might be a bookshop, it might be a planet, or it might be a doorway into another dimension. And Porrig is worried, because he has learned a great and terrible secret. But will anyone listen to him when he tries to tell them? No!

It's a pity that people rarely listen, because, in this case, had they troubled to do so, the world would have been spared from all the madness and mayhem, the thousands fleeing in terror, the mad monster laying waste to half of London and the dirty great explosion at the end. But then, there wouldn't have been much of a story if they had listened.

What listeners say about Apocalypso

I have been working my way through Rankin's catalog, and they keep delivering. Rankin's writing is a bit silly and convoluted, but I am consistently giggling as I listen. He is also quite talented as a narrator.

Our hero is not outstanding, not a moral paragon, not the person you would meet on the street and nominate for greatness. He is a self-interested slob, a clueless failure with women. But he does have the gumption, or something, to excel inside him - with the proper kick in the pants and the help of an immortal, a fairy( goblin?) and a magician.

Robert Rankin is an author of prodigious talent in producing the absurd. Mixing together aliens, magic, alternate worlds, Houdini, etc - but you will never guess the outcome.

Not to be missed is the confrontation between the railroad train and the army tank. No movie has done a better job of this cinema tour-de-force.

The author is very talented at both writing and voice acting. He reminds me a little of Terry Pratchett. This book was good, I just didn't enjoy it. The writing is very enjoyable in a comic/slapstick way but it lacks story. There isn't any real character development and there isn't any real story. Most of the book is just staging for jokes. If you are ok with that, then have at it. I know I still laugh at Mr. Farr T. Baum.

I am not typically a proponent of burning books but this should be thrown into a large fire.

i really enjoyed this book and loved the story. I'm confused why there needed to be a jab at transwomen. the only this missing was her, being referred to as he, having aids and a drug addiction. maybe the next book will further expand the degradation.

No redeeming qualities. Every character is an idiot and the language is offensive. There is nothing good to say but the review requires fifteen words. Overpriced at free.

Robert Rankin is an acquired taste. His writing can be extremely silly at times, but it's fun.

I really enjoyed this book ....it's one that I will listen to again for nuances I may have missed this listen. The author is very clever and skilled, and the story is expertly delivered by the author too. Fantasy, villain, heroes, and helpers, hope, despair, and miracles. All that I need these days.

This is an amazing ride. The protagonist is just dislikeable that your not upset when he catches hell but just flawed in a relatable way that you root for him. Even the supporting players are fleshed out enough for you to worry about. The imagery and narration are so vivid you can close your eyes and see it. I hate when critics say "a humorous, edge of your seat" blah, blah, blah but this truly is worthy of just such a phrase.

Sometimes it’s better to let someone else read ‘your’ story. I cannot finish this book as the author has decided to read his own work, and though he may be a fantastic writer (unfortunately I can’t finish listening to give an opinion) a narrator he is not!

This is my first book I've read from this author and I'll be swiftly moving onto another, loved the story and the narration was perfect.

I loved the story but the talk about trannies was very jarring, even with the character professing to be bisexual the transphobia was unneeded.

Easy and jolly read light hearted and brilliantly performed, reminded me a lot of Hitchhiker's guide in terms of comic value.