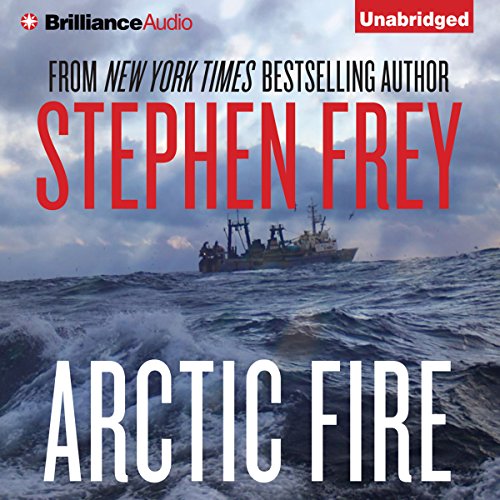 The story went something like this: Troy Jensen, who sailed solo around the world and conquered the seven summits, fell off a crab boat called Arctic Fire and drowned in the Bering Sea. Troy’s brother Jack, who doesn’t buy the story for a minute, heads to Alaska to uncover the truth. Jack discovers a connection between Troy and a secret intelligence organization known as Red Cell Seven (RCS) that will stop at nothing to protect America from threat (even if they have to kill thousands of Americans to do it). The problem is, the more Jack learns about Troy’s involvement with RCS, the more RCS learns about Jack. Arctic Fire is an adrenaline-pumping tale of one man’s descent into an underworld populated by terrorists, assassins, and viciously bad good guys.

What listeners say about Arctic Fire

loved it, it is very cut throat but it was well done

The Red Cell Seven is a covert group created in the 1970s by US President Richard Nixon in an effort to prevent attacks against this country. The black-ops group reports only to the President. No oversight. No restraints. Free from any prosecution. Unlimited budget. No questions asked. Basically, government-approved vigilante authority, include murdering at will as required, at their discretion - even innocents deemed a threat.

Book 1 starts with the formation of Red Cell Seven. It's called 'seven' to throw the Russians off - President Nixon thinks Russians spend all their time looking for the first six covert operations. That's pretty much the only reference to Russia - the series is mostly about preventing domestic and Islamic terrorism - in addition to targeting the current administration with multiple assassinations because the current President wants to shut down Red Cell Seven.

Not so hot. The books are very similar, not that there is anything wrong with any of them - none stands out. It's just a very long espionage story. Depressing in that it's possible. Read from book 1, Arctic Fire. Book 2, Red Cell Seven, Book 3 Kodiak Sky.

You'll be left torn as to if the behavior portrayed in Red Cell Seven is a good thing - or not. It's sorta scary to think our government is capable of this stuff - but, it is. Exhibit the current President in 2019, who believes he can "do anything he wants", and America does nothing to stop him.

If you could sum up Arctic Fire in three words, what would they be?

The hole series what action after action, if you like that then this is the Series for you!!

Fuel for the edrenaline junkie!

In "Arctic Fire," Stephen Frey introduces us to Red Cell Seven (RCS), an ultra-secret arm of the U.S. intelligence apparatus. RCS has been operating for over 40 years and is apolitical, protecting the interests of the United States rather than any one political ideology. The new president, however, is not willing to let RCS operate with impunity any longer and is threatening to dismantle the organization. Certain rogue elements within RCS will not allow that to happen, no matter what it takes to survive.

Troy Jensen is an operative in RCS, unknown to all his family except his father, former Marine Colonel and CEO of one of the worlds largest banks. Jack Jensen, Troy's adopted brother, thinks Troy is just a spoiled rich kid, traveling the globe in search of adventure. But while Troy is off climbing mountains or fighting bulls, he is actually gathering intelligence and using his "hobbies" as cover. His latest adventure sees Troy working on a crab boat in Alaska, one of the most dangerous jobs in the world. But it would seem Troy tempted fate once to often and his family is notified that he was washed overboard by a wave during a storm.

Jack had never come to terms with his being adopted. In addition to wondering who his real parents were, he never could seem to live up to Bill's expectations. Troy was seemingly the perfect son and the pride Bill had for him was painfully evident. Jack thought part of the reason was that blood was thicker than water. But Jack cared for Troy as only brothers can, adopted or not, and he did not believe the story of Troy's death. Troy was a survivor. There was no way Troy would have been the only person washed overboard. If anything, he would have been the one to save the others as he had done in the past. Jack quits his job as a bond trader and treks to Alaska in order to find the truth. But Jack makes some very dangerous people nervous and is soon running for his life.

This was an enjoyable read, fast paced and full of action. The plot was, for the most part, very believable if not somewhat scripted. The ending was a stunner and seemed to come out of left field. I am not really sure what the author was intending with it. It is obvious he was setting it up for a sequel, but the ending seemed to raise more questions than necessary. That being said, if you are an action junkie, then you will enjoy this book.

I really enjoyed the story concept however I think at times the author was looking for page fillers. I am looking forward to future books

I SHOULD HAVE PAID MORE ATTENTION TO THE REVIEWS!

This book is almost a disaster and the reader is an unqualified disaster. I am used to thrillers being a bit far-fetched and accept that, but this plot not only goes over the top, but begins to slide down the other side. Conspiracy plots are a bit tricky to write well and Stephen Frey botched this one. I had read 4 other books by Frey and they were OK if not great; this one does not make that grade. Bad enough that the plot and writing are poor, the listener is forced to hear a very poor performance. The readier has nice voice timbre but he exaggerates words and syllables so often that it is very off-putting. There are multiple characters in the story who play an important role, but the reader uses the same "voice" for several of them. In the last third of the book, the two main characters, who turn out to be half brothers. I guess the reader figured he should use the same voice for each since they share some genes. The only way the listener is able to distinguish the two is by the author use of "Troy said" or "said Jack". I probably should have said "plot spoiler" two sentences ago, but as the plot is so bad, I hope you won't read the book

What disappointed you about Arctic Fire?

The writing is painfully bad. About half way through I had to force myself not to jump to the end. The scenes are built clumsily, the characters are annoyingly one dimensional, and the 'human interest' love story simply repeats 'he looked at her long dark hair and deep dark eyes' over and over again. It sounds as if written by a teenager. The only saving grace is that it is read well and it is relatively short. I will never get another Frey book again.

Would you ever listen to anything by Stephen Frey again?

Not much - he is a good narrator.

What character would you cut from Arctic Fire?

Sadly, all the main characters - they are each so thinly created that you could lump them all together and perhaps get one fully developed character - which I would cut.

Painful to finish because of the writing, not the narration.

Read it to avoid the annoying performance

I have enjoyed William Dufris in the past but not in Artic Fire and Red Cell Seven. His character voices get confused and he is CONSTANTLY sighing, loudly. It's so distracting. In Red Cell Seven he has a stuffed up nose making it even more distracting. He also blusters too loudly making his older characters seem psychotic rather than passionate.
As for the characters, the older brother Jack is a whiny wimp.

Character development. Reasonable transitions between characters and events. Finishing the book rather than printing the plot summary in the last 10 pages.

Setting and plot had promise. It was not reralized.

Was there a respectable editor? It seems to have ended as is when due, like a high school history report.

Juvenile treatment of Jacks personal relationship with Karen. Overly dramatic performance of the reader, and often inappropriate and just plain ridiculous interpretation of the text. I would have stopped listening if I hadn't started listening simultaneously to "Red Cell Seven"
which is better written and performed.

Tried this author before

I have tried reading this author before and found it really hard going. However I thought I'd give it another go with a different series of books and have really enjoyed this first in a series of 3.
Full of action, intregue , and a little romance and sadness.
A highly recommend read even if this is not your usual genre.

I am vey pleased to have heard this book on Amazon's KindleUnlimited. I was able to borrow and not have to pay. I found it fragmented, good old USA and ended up skimming through.