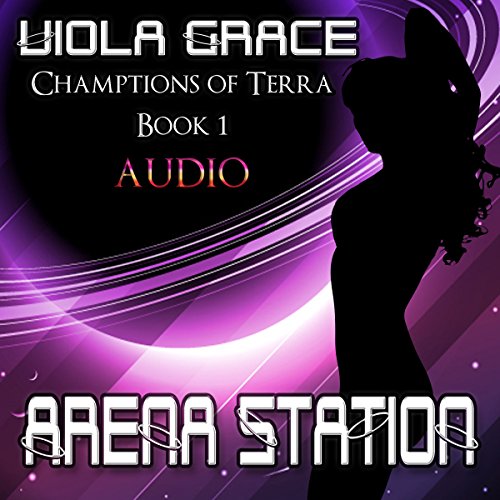 Leaving Earth had been Kyra's idea. Being stolen while in stasis and sold to an arena was not. Fighting for her life every day, plotting her escape, took up most of her time. When she was forced into an intimate situation with one of the alien gladiators, she suddenly had other things to think about.

Tiergar was a champion, one of the highest -and deadliest-ranking of gladiators on the arena station, and he had no problem taking what he needed. As often as he needed it. Kyra had a lot to think about and not a lot of time to do it.

What listeners say about Arena Station

Liked the story, not the voice.

I have read all of the Champion Books, and enjoyed them. When I listened to the audible version I cringed listening to the voice reading the story. I didn’t enjoy the book like I have before.

Sex. No story and a flat narrators voice.
I will not be listening to anymore stories by this narrator or author. Both were found lacking.

story not bad, needs more but the narrative was horrible! I couldn't even finish! ugh!

I really enjoyed listening to this audible book. The interaction between the characters was truly memorable.

Would you try another book from Viola Grace and/or Kellie Kamryn?

Yes to Viola Grace - I like her stories, I read them all the time.
NO to Kellie Kamryn. I've now attempted to listen to two stories read by her and each time I have not managed to finish the story due to the poor quality of the narration.

The story was good. I enjoyed reading it. The narrator.....

I love the author and her writings but the narration was awful. I didn't even get past the sample. won't buy unless they reduce with different, more appropriate and animated voice.

I really wanted to like this book but listening to the narrator was so unbearable I had to give it up. A sexy adult book narrated by a childish voice is just wrong. Kellie Kamryn is definitely wrong for this book, and the wrong narrator can completely ruin the listening experience. I won’t be buying the rest of the series.

Love the Book - hate the performance

What would have made Arena Station better?

Viola Grace is one of my favourite authors, so I was extremely happy to find the books on Audible. However, the performance is so bad, I can barely listen to it. The sing song cadence, pauses in all the wrong places and weird inflections all make for a disappointing audio book. Kellie Kamryn has excellent elocution, pronouncing every syllable, but it comes at the cost of telling the story.

Who might you have cast as narrator instead of Kellie Kamryn?

Almost anyone. Preferably someone who loved the books and had read them before recording them.