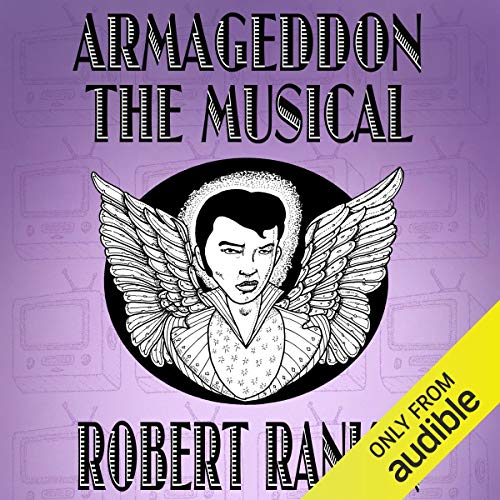 Free with trial
1 credit a month to use on any title to download and keep
Listen to anything from the Plus Catalogue—thousands of Audible Originals, podcasts and audiobooks
Download titles to your library and listen offline
₹199 per month after trial. Cancel anytime.

A weird and wonderful romp through the galaxy in the grand tradition of Douglas Adams and Terry Pratchett. The plot involves multiple worlds and dimensions, a post-apocalyptic Earth, a religious leader named Dalai Lama Dan, Elvis (with a talking sprout embedded in his brain), and plenty of commentary on religion, television, and pop culture. Performed by author Robert Rankin himself in a warm English accent, and stuffed with laugh-out-loud humor. Some might find the plot a bit complex, although plenty of others will enjoy the wackiness and touches of true comic brilliance.

From the point of view of 2050, you're history. Theological warfare. Elvis on an epic time-travel journey - the Presliad. Buddhavision - a network bigger than God (and more powerful, too). Nasty nuclear leftovers. Naughty sex habits. Dalai Dan (the 153rd reincarnation of the Lama of that ilk) and Barry, the talkative Time Sprout.

Even with all this excitement, you wouldn't think a backwater planet like Earth makes much of a splash in the galatic pond. But the soap opera called The Earthers is making big video bucks in the intergalactic ratings race. And alien TV execs know exactly what the old earth drama needs to make the off-world audience sit up and stare: a spectacular Armageddon-type finale. With a cast of millions - including you! Don’t touch that dial - it’s gonne be one helluva show…

Robert loves going on tour, signing books for readers, and his appearances at signings and conventions are legendary, often including a stand-up routine, a song (accompanied by his 'air-ukulele'), and an always-entertaining question-and-answer session.

"Stark raving genius...alarming and deformed brilliance” ( Observer)
“He becomes funnier the more you read him” ( Independent)
“Everybody should read at least one Robert Rankin in their life” ( Daily Express)
“One of the rare guys who can always make me laugh” (Terry Pratchett)
“To the top-selling ranks of humorists such as Douglas Adams and Terry Pratchett, let us welcome Mr Rankin” (Tom Hutchinson, The Times)

What listeners say about Armageddon: The Musical

I Couldn't Finish It

I don't think this is salvageable in that way. I got to 3:48/10:15 and had to quit. And I have listened to some crap all the way to the end out of my compulsion to completionism.

What could Robert Rankin have done to make this a more enjoyable book for you?

I'm American, and while I listen to a decent number of British audiobooks and watch a smattering of British television, the amount of British colloquialisms and slang (as well as their narrated delivery) was off-putting to me with its unfamiliarity. I may be too ignorant of whatever dialect Rankin was using, and possibly a British audience would respond better to it. It was like fingernails on a chalkboard over here.

The plot was... nonsense. Not fun Terry Pratchett-heartwarming-nonsense. Not zany everything's-game-Douglas Adams nonsense. Just ridiculous. It was a running commentary on TV viewing for fun and profit and the decline of humanity. It got old, and I didn't even make it to the end. Of course, this is a bigger issue than the dialect choice. The dialect just turned me off first.

What character would you cut from Armageddon: The Musical?

They seemed to be cutting themselves efficiently enough... Geez... Elvis. I'd cut Elvis. What the hell was Elvis doing in there in the first place? I will certainly never know--I'm not going back to find out. Also, Elvis was an actual human being. Something about putting a real human into your nonsense alien apocalypse cannibal television story doesn't sit well.

It’s a good book which I enjoyed when I read it, but this is a time when the author isn’t the best person to read it. He’s not bad, but not a professional and it shows in a slightly stilted delivery and difficulty differentiating characters with his voice. I’ve heard worse, but I can’t finish it.

I first discovered this book in 1990. Bought it, read it, laughed my tits off!!
A newer more modern take on outlandishness than Douglas Adams. I mean come on, the Dalai Lama is the anti-christ, Elvis who has a time travelling sprout called Barry in his head, Jesus' twin sister is helping out cos she's pissed at being left out of the bible and a bunch of power crazy aliens. What's not to like?
The narration is by the author. He's quite dry but it works. I have read this book and many more of his quite a few times. Love it!

How does he tie all the sub plots and characters together. looking forward to book 2.

silliness at its best ! can't beat a Robert Rankin book to make you laugh

This is a somewhat strange book but for all
The right reasons. If your perfectly happy reading a story about a time traveling Brussel sprout called "Barry" then this is for you. Hilariously funny, darkly comical and somewhat twisting timelines plot makes this a laugh along book. Read by the author and with district voices it really engages you to listen on. I'm moving on to the other 2 titles in the Armageddon trilogy. Fantastic stuff

As mentioned by other users, this really would have been better with a professional narrator. This is a great book, a favourite from my late teens/20s (I still have a physical copy). Do yourself a favour and get the ebook. (speeding Robbie up to 1.25x sorts out the slow pace of reading if you are going to persevere)

really wanted to line this but...

the writing and comedy notes just kept falling flat for me. couldn't find myself liking the characters and the page felt too slow. Sorry rr

rankin at his finest

if you live his books you'll love this one. Adventures of Elvis and his time travelling sprout.

Recommend trying "the Antipope" or others from the bentford triangle series. Somehow the full cast audio makes a great introduction to Robert Rankin.
Whereas, There's a lot of dead air in Armageddon: the musical. It's like Roberts waiting for the laugh that never comes on every line. Occasionally, there's even lots of air between the words themselves. Sure, I feel like I laughed like that as a teen reading this, but it's lacking something here in the reading, or maybe my sense of humour has changed.
Suggestion for those determined to start here, use the speed setting to compress the reading a little. It may be what saves your attention and allows you to have a chuckle and move on without feeling the need to start talking to yourself