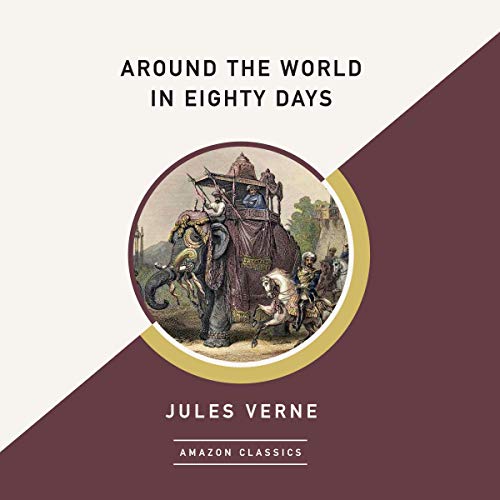 Pragmatic gambler Phileas Fogg has made a gentlemanly wager to the members of his exclusive club: that he can circle the world in just eighty days, right down to the minute. Fetching his newly appointed French valet, Fogg embarks on a fabulous journey across land and sea - by steamer, rail, and elephant - to win the bet of a lifetime.

Inspired by Jules Verne's own sea travels and his fascination with circumnavigating the globe, the avid dreamer's picaresque voyage inspired generations of adventurers who were eager to best Verne's challenge - from nineteenth-century journalist Nellie Bly to Monty Python's Michael Palin.

AmazonClassics brings you timeless works from the masters of storytelling. Ideal for anyone who wants to listen to a great work for the first time or rediscover an old favorite, these new editions open the door to literature's most unforgettable characters and beloved worlds.

Really good story, made better by a GREAT performance! I would recommend this to anyone looking for a good adventure book.

I like how he is always calm in every situation. It also shows some different cultures which I enjoyed.

interesting and feels like your in the story.
would recommend it to anyone with an imagination.

Clear and concise, great for someone who wants control of the speed of reading books

While the narration is with an American accent, each character is given a distinct accent, be it British, French, calm, or excitable.
As my first “reading” of this classic, I didn’t know how it would end. May be sappy, but I didn’t expect it until almost the last chapter. The story of an unemotional, un-moveable Englishman who hides away his feelings is not a new theme, but it is still captivating. And the narration certainly brings life to the story!

I loved & was surprised by the turning of events; a most enjoyable listening experience!