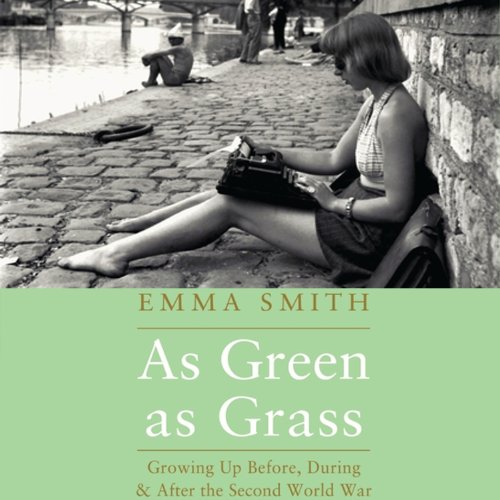 As Green as Grass

Growing Up Before, During & After the Second World War
Written by: Emma Smith
Narrated by: Christine Rendel
Length: 12 hrs and 11 mins
Categories: Biographies & Memoirs, Memoirs

Uprooted from her beloved Great Western Beach, Emma Smith moves with her family from Newquay to the Devonshire village of Crapstone. But the dust has hardly settled when tragedy strikes, and Emma’s father, a DSO-decorated hero of the Great War, is so frustrated by the hardship of life as a lowly bank clerk and by his thwarted artistic ambitions that he suffers a catastrophic breakdown - from which disaster Emma's resourceful mother rallies courageously. Then, in 1939, the war again becomes a reality. Emma’s pretty sister Pam at once enlists with the WAAF and Jim, her politically minded brother, after initially declaring himself a pacifist, joins the RAF. But what should Emma, aged only 16, do? Secretarial collage equips her for a job with MI5 but it’s dull work and Emma yearns for fresh air. She is rescued by a scheme taking on girls as crew for canal boats. Freedom! The war over, Emma travels to India with a documentary film company, lives in Chelsea, falls in love in France and spends time in Paris where she sets about mending a broken heart by writing her first novel. Sitting beside the Seine during a heatwave with her typewriter on her knees, she is unwittingly snapped by legendary photographer Robert Doisneau. The zest, thirst for life and buoyant spirits of Emma, as she recalls in evocative detail the quality of England in the 30s and 40s, give As Green as Grass the feel of a ready-made classic.

What listeners say about As Green as Grass

What did you love best about As Green as Grass?

I love history of all types, and I love stories set in a specific historical setting, so this is right up my alley.

What does Christine Rendel bring to the story that you wouldn’t experience if you just read the book?

Christine Rendel's narration is superb. She brings the book to life in an extremely evocative way and I look forward to listening to her other work.

I'm spreading out my listening so I can look forward to it after long work days.

An interesting and well-written memoir

The biography takes us from the late 1930s through the War and afterwards. It is told in a straightforward, clear way and is full of incident

Would you be willing to try another book from Emma Smith? Why or why not?

Would you be willing to try another one of Christine Rendel’s performances?

No, although her articulation is clear, her voice lacks any warmth or dramatic range. It's very monotonous with a slightly metallic edge and I could only listen in short bursts

Yes, as it's a period of history I'm very interested in.