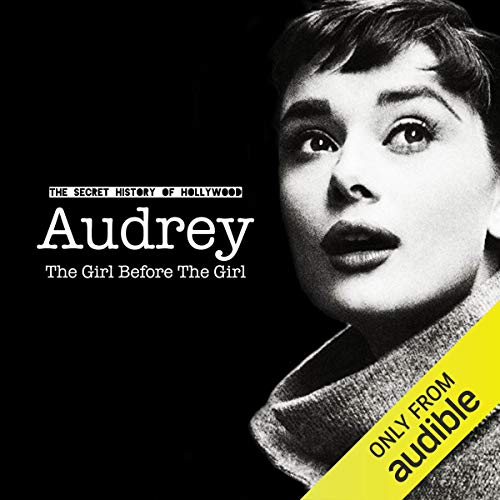 Audrey Hepburn became an instant Hollywood icon whose style and talent instantly captured the public’s imagination. In the ensuing decades, she has gone on to become one of Hollywood’s most enduring legends. But many are unaware of the story leading up to her introduction to the world; a tale of survival, of tragedy, and the triumph of the human spirit.

The life of Audrey Hepburn began not upon the screen, but in a small corner of Europe, and under the wing of a family that was to see their world torn apart by the storm of war, and by the legacy of a dark family secret. In Audrey: The Girl Before The Girl, hear the incredible true-life story of Hollywood’s most resilient and iconic survivor, and of the sometimes unbelievable childhood that shaped her.

What listeners say about Audrey: The Girl Before the Girl

As with his podcast series, Adam's tales of old Hollywood are gripping, fascinating and a worthy listen. While many may know snippets of Audrey's history, such as her involvement in the war effort, or her love of dance, Adam tells her tall with passion, turning fact into a character-driven story that flows easily through her early years. Where needed, he drifts off into asides of relevant side characters, strengthening their importance in Audrey's tale. And as it ends, you're left both satisfied and desperate for more, having reached a point where Audrey Hepburn has stopped being a screen icon, and has almost become a friend, whose story you wish to learn more of. Brave, Adam, for an incredible tale. Let The Secret History of Hollywood continue to entertain and inform us for many years to come.

What i love about how Adam tells a story, is the way he weaves other people, events and stories into the main thread. Totally engrossing. At times funny, full of facts and totally heart breaking

I got this free from audible some time ago and finally got round to listening this weekend. Over five hours yesterday and the rest today/ wanted to listen every free moment. . It’s brilliant. Informative. Gripping and. Emotional. I had no idea Audrey Hepburn had lived in such difficult dangerous circumstances and had risen from near death to become the star she was. The episodes are dramatic but not over sensational and the historical detail is helpful though at times detracts from the human story. Loved it. Thank you audible.

I was engrossed from start to finish.... completely surprised to hear the amazing life story of this iconic actress....

I was always amazed by her beauty

Now I’m amazed by the strong, brave and good girl that she was. Inspirational character.

Wow. I’ve always thought Audrey Hepburn was pretty fabulous as a beautiful, elegant woman and actress. Now I understand why. She has so much depth and experienced so much. What an inspiring woman of internal and external beauty.

Truly fascinating story, beautifully performed. couldnt stop listening, even when it was terrifying. must hear

Really interesting to listen to.

Really good story of a difficult life., to fame. Harrowing in parts.,hard to acknowledge the horror of war.

narrated perfectly,the ending the best part was the amazing end to an amazing life story

Beautifully written and a first rate narration. I never really took much notice of Audrey Hepburn before. Now I want to know everything about her.

Absolutely absorbing from with very start. Just a wonderful story full of so much history so many interesting facts. I listen from start to finish in 24 hours. It was absolutely beautiful.
So beautifully presented and narrated.

There is NOTHING about this series which should be altered. I was captivated from start to finish.

Every aspect of this is brilliant. The narration keeps the story interesting from the start to the finish. The first half is like listening to a novel about a person you don't know, which is engrossing in its own way. The more familiar part of Audrey's career is more predictable but great to listen to.