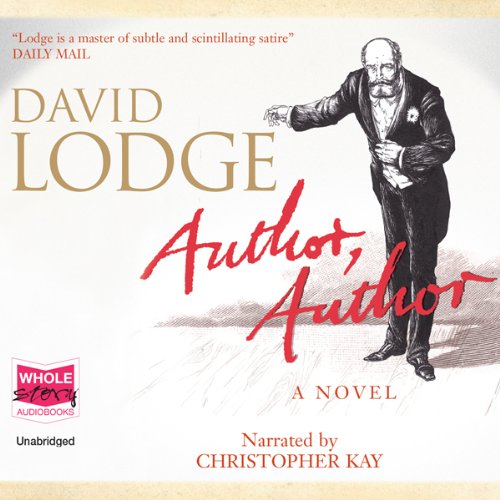 In David Lodge's last novel, Thinks..., the novelist Henry James was invisibly present in quotation and allusion. In Author, Author he is centre stage, sometimes literally. The story begins in December 1915, with the dying author surrounded by his relatives and servants, most of whom have private anxieties of their own, then loops back to the 1880s, to chart the course of Henry's 'middle years', focusing particularly on his friendship with the genial Punch artist and illustrator, George Du Maurier.

By the end of the decade Henry is seriously worried by the failure of his books to 'sell', and decides to try and achieve fame and fortune as a playwright, at the same time that George Du Maurier, whose sight is failing, diversifies into writing novels. The consequences, for both men, are surprising, ironic, comic, and tragic.

This is quite different from past David Lodge books, which have been droll satire. This is a straight biography of a very straight-laced man, Henry James. It moves rather ponderously, and while there are flashes of wit, the slow and drawn-out exposition does move slowly, even more so given the deliberate pace of the reading. Fortunately the writing style is not quite so convoluted as that of James, especially in his later novels, but this felt like a long slog -- interesting enough so that I didn't want to quit, and with some real insights into James' life, but still rather a slog.