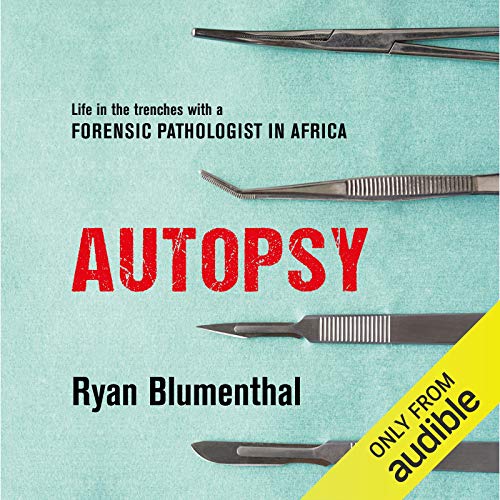 As a medical detective of the modern world, forensic pathologist Ryan Blumenthal’s chief goal is to bring perpetrators to justice. He has performed thousands of autopsies, which have helped bring numerous criminals to book.

In Autopsy he covers the hard lessons learnt as a rookie pathologist, as well as some of the most unusual cases he’s encountered. During his career, for example, he has dealt with high-profile deaths, mass disasters, death by lightning and people killed by African wildlife.

Blumenthal takes the listener behind the scenes at the mortuary, describing a typical autopsy and the instruments of the trade. He also shares a few trade secrets, like how to establish when a suicide is more likely to be a homicide.

Even though they cannot speak, the dead have a lot to say - and Blumenthal is there to listen.

What listeners say about Autopsy

This book was fascinating, the material easy to understand and gives a glimps into a world many of us are unaware of. I was sad when I reached the end. The writer is knowledgeable and very human. I loved the book.

This guy lost me in the very first chapter when he talked about “painless” death. He claims that suffering a major heart attack is a painless way to go. As a paramedic with 25+ years on the street, let me tell you, folks suffering from major heart attacks are in extreme pain and distress. There is nothing painless about it. This guys sees them when they are dead. I see them as they are dying.
He also claims that falling into an active volcano is a quick death. You don’t sink and instantly die on molten lava. It is rock. You lay atop it and burn to death. Granted if the heat is high enough you will rapidly lose consciousness. If not though…
It scares me that the author is a forensic pathologist. He seems to lack a basic understanding of firearms and ballistics. He claims that “military” bullets are designed to kill by passing through their target without dumping all their energy into it. No, full metal jacket ammo is designed for better penetration. It is also used by the military because expanding bullets (hollow points) are banned by the Geneva Convention. The author claims that hollow points are designed to dump all their energy into the target to cause disabling pain, but not be lethal. Hollow point ammo is designed to dump all of its energy into the body and expand to prevent over-penetration. It is absolutely designed to be as lethal as possible. He also rails against the mythical “Black Talon” ammo. That is pure media hype. It is just a regular old hollow point painted black too look cool. There are much worse rounds out there.

Got what I wanted!

I beautiful constructed journey through the day in the life of Dr Blumenthal. I will actually listen to this again some day.

in the forensic pathology world

fast "read".i felt like a student. it was an interesting career choice especially in South Africa,

I wanted to learn more about this subject I thought this would be a good start. although this was in South Africa I think it painted a wonderful overall picture of what a medical examiner does, painting pictures and describing smells I could almost see and smell myself.
I would recommend this, it is educational, philosophical and in the end reminds us to be better people.

This book contained some rare insight into forensic pathology specifically in Africa. It was just the right length and enough detail to make it interesting. The narrator was also very good as a bad narrator can destroy an otherwise good book.

Excellent account of what happens behind the scenes. Really eye opening. I could not stop listening. Thank you

I really enjoyed the book and the African twist to it! The last chapter hit hard and I am sure we can all learn something.

At least three times the Author mentions how poorly paid he is - can't help but think this is just a rushed cash grab to supplement his income, especially when you can count on one hand the amount of cases he talks about that he was actually involved in. No real detail and lots of pseudo philosophical filler in what is a very short read. Switches constantly between assuming lots of medical knowledge and explaining things in layperson terms. Possibly a good read if Autopsy and forensic pathology are completely new words in your vocabulary.

Wonderful and made me long for Africa

Interesting anecdotes and pragmatic life advice.
The narrator is an absolute pleasure to listen to - smooth and calming tone. Really enjoyed it. About to listen again!