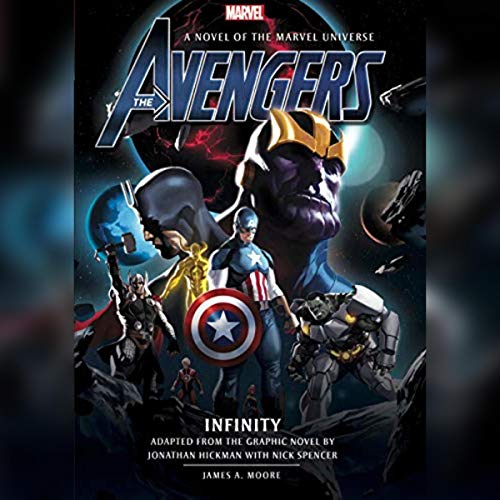 Written by: James A. Moore,Marvel
Narrated by: Dion Graham
Free with 30-day trial

The Avengers journey into deep space, where they unite the intergalactic races against the Builders - deadly aliens who seek to destroy the known galaxy. While the heroes are gone, Thanos sets his sights on Earth, sending the Black Order to launch the assault. It falls to the other heroes of Earth - the Inhumans, the Black Panther, Namor the Sub-Mariner, Doctor Strange, the X-Men, and more - to defend Attilan, Wakanda, Atlantis, and the rest of the planet. To defeat Thanos, the defending forces will need to deploy a new weapon - one that may be as deadly as the invading force.

What listeners say about Avengers: Infinity

the voice reader did a really great job .i

I like that in the story the voice reader gave his listers the passion to bring it to life.

I still like the idea of real sound effects but this guy is a great storyteller.

This is a very cool, interesting and very large scale adventure in the comics. The author does a great job painting a picture and the voice work is fantastic!

Great story. the narration was okay. I wasn't too found of the voices for some if the characters but the book was still enjoyable. I just wish the antagonist would win for a change.

This story is not all that interesting.

I wasn’t really too crazy about the story. I only went through half of the book before skipping through the rest of it at the end so I can get the rating and the reviewing out-of-the-way. I honestly prefer the graphic audio versions of the Marvel or DC books.

Thanos was the worst voice I have ever heard EVER. I mean bad. Everyone else was spot on. Again Thanos voice SUCKED. Good book tho

The title says it all. I enjoyed this space opera and the narration - great work!

Needs to be proofed before going live.

I loved the story and the narrator is great but it’s as if nobody listened to it before putting it on audible.
The punch-ins are really noticeable and there was even a moment where the narrator fumbled his words and did a retake … all of it was left in haha
Again, otherwise great… I forgive these mistakes , I just find it very funny.

A brilliant story with complex and interesting character development.
A must read for people who like many superheroes in a story.
It’s then avengers Infinity War book was based of this comic find a huge fan of the movie but the book changes it in a good way which makes it story about people who aren’t necessarily in the MCU at that time of avengers Infinity War release