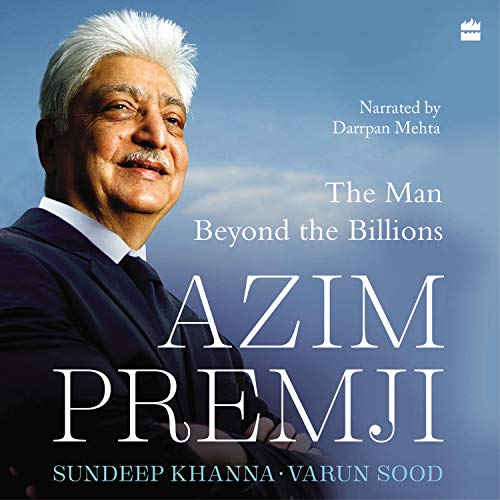 For over fi­ve decades, Azim Hasham Premji has been one of the trailblazers of India Inc. Taking over his family business of vegetable oils at the young age of 21 after the untimely demise of his father, he built one of India's most successful software companies along with a multi-billion-dollar conglomerate. As of 2019, he was the 10th-richest person in India, with an estimated net worth of 7.2 billion dollars. Yet, the one facet of the man which has overshadowed even his business achievements is his altruism. His commitment to the Azim Premji Foundation, a non-profi­t focused on education, totals around 21 billion dollars, making him one of the world's top philanthropists.

Azim Premji: The Man Beyond the Billions, the fi­rst authoritative biography of the icon, shows how Premji is a philanthropist at heart and a businessman by choice - a man who wanted to give away his billions, but realized early enough that he would ­first have to earn them. It peels the layers off Premji's life while chronicling his professional and charitable work in the context of his many strengths and shortcomings.

Based on interviews with hundreds of current and past Wipro executives, who have over the years worked closely with him, as well as with competitors, analysts, family friends, and industry associates, this is a journalist's account of Premji the man, the businessman, and the philanthropist.

What listeners say about Azim Premji

If people are not laughing at your goals…

One of the must read for all professionals. From Vanaspati business to IT giant to one of the worlds most respected philanthropist.

If people are not laughing at your goals, your goals are too small… Premji

I respect Mr Azim Premzi. This audio book is a deep insight behind the man and his vision and execution style at Wipro.

The book throws some light on the areas as to why Wipro's IT business is not as good as its comparable peers. In my opinion, little more detail on the success of IT business would have added value to the book.

well narrated, shown all aspect of a person, real learning. will find similarity with lots of our bosses at work place.

loved it over all but it lacked depth and research. it hardly covers whole story of how wipro was made. author mostly shared generic outlook and events rather then dive in and find more detailed and wholesome story.

A must read for every Entrepreneur

To portray Azim Premji, an individual who is more of an introvert is always challenging. Authors do justice to his persona in an unbiased manner. A must read for budding entrepreneurs as well as IT professionals to know how India became a major IT center.

Good Book with insight of a Business Empire

If people do not laugh at your goals ...it means your goals are not big enough