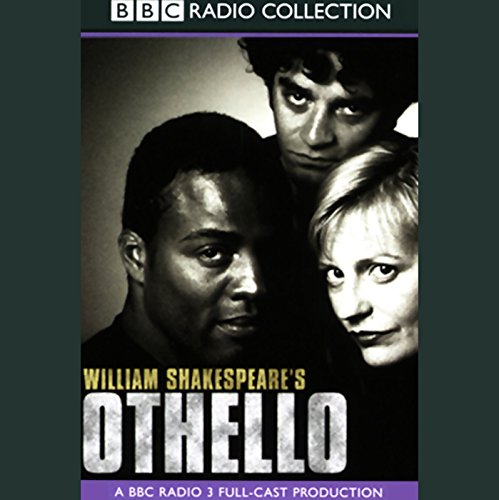 In this story of evil cunning perverting a once noble mind, radio captures Iago's sly hints and boasts to the audience with shocking clarity. The listener is led along an emotional path that grips with fascinating horror until the play's inevitably tragic conclusion.

The performance was true to the text, with care. The musical interludes were modern, as were some of the sound effects (e.g. the Herald was, cleverly, a radio news bulletin), but they worked.
The actors were extremely talented. Each was true to his/her character. It was my first full hearing of Othello (although I had seen an updated dramatization called "O" on the screen). I read along and this production was easy to follow in the text. I highly recommend this production for entertainment and education.

This BBC series of dramatized Shakespeare's plays is very good. It's so much easier to understand when there are multiple voices, almost as good as a play.

Shattering Performance of a Magnificent Play

Othello is my favorite of all of William Shakespeare's plays I've experienced. Of all of his plays, and indeed his final and greatest four tragedies (Othello, Hamlet, King Lear, and Macbeth), Othello is among the most deeply personal and intimate. Why it's not as lucky on audio (or video) as many others is baffling to me. Of all of the Audible editions of Othello, this is far and away the one that moved me the most. Also, unlike many of the other plays from this BBC series, the performance is quite complete other than a few minor cuts. The performance itself is emotionally shattering, the leads in particular completely committed to eliciting the full effect of Shakespeare's dialogue. Anastasia Hille brings a wonderful balance of intelligence, strength, and innocence to the role of Desdemona, not allowing the character to fade into the background. James Frain gives a tour-de-force performance of one of the most deliciously evil and brilliant villains ever written. Right from his opening dialogue one can tell he's already in complete control of the situation and always several steps ahead of everyone else. Unlike many other performances, however, Frain understands that the character of Iago should not completely dominate every single scene of the play. He allows room for Ray Fearon to shine as Othello, and shine he does. Fearon is completely believable as the Moor, noble and powerful, but also vulnerable and trusting to a fault. The fact that he plays Othello with a confident restraint rather than melodrama makes the ending all the more tragic. In the final scenes of the play, Fearon speaks in a hushed whisper of a voice, almost completely devoid of affectation. Because of this, I could feel the world around this once confident, powerful man come crumbling down around him. Smaller roles, too, are well-performed. As for the technical aspects of the audiobook, the sound is quite good, though I wonder if Audible could re-upload it in stereo for full effect. Music and sound effects are not overbearing, and there are some nice touches in direction, such as actual singing when appropriate. To me, not only is it the finest Othello on audio, but also easily the best performance of the BBC Radio Collection series. Absolutely recommended!