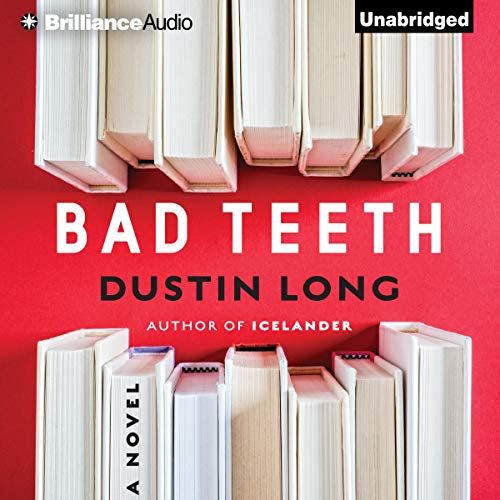 Bad Teeth follows a cast of young literary men and women, each in a period of formation, in four very American cities - Brooklyn, Bloomington, Berkeley, and Bakersfield. A Pynchonesque treat, it’s four (or more) books in one: A bohemian satire, a campus comedy, a stoner’s reverie, and a quadruple love story. The plots coalesce around the search for a mysterious author, Jigme Drolma ("the Tibetan David Foster Wallace"), who might in fact be a plagiarist. But how does the self-styled arch-magician Nicholas Bendix figure into this? What will happen when SOFA unleashes the "Apocalypse"? And what’s to become of Lump, the cat?

What listeners say about Bad Teeth

Hipster Pose and No Substance

What could Dustin Long have done to make this a more enjoyable book for you?

He generally read well, but his female characterizations were overdone and disappointing. Many sound like spoiled eighth grade girls when they're actually in their mid- to late 20s.

One annoying thing about hipster novels – as a genre – is that they imply a community of conversation that you, as the reader, are closed off from. And the basic rhetoric of the hipster is to leave large elements unexplained while focusing instead on the mundane. (The classic instance of that, of course, comes in Pulp Fiction when the hitmen, on their way to kill a group of teenagers for reasons not worth explaining, have a passionate debate about Big Mac and foot rubs.)

One beguiling thing about hipster novels is that they give the impression they represent the vanguard of a new way of seeing the world. They’re the organs of the next wave of culture, and they carry the promise that this different weighting of what warrants attention will matter in time to come. Andy Warhol, for instance, elevated the Campbell’s Soup can to iconic status, in part, because he was commenting on the nature of superficiality – on the role of image in contemporary culture – and he turned about to be powerfully prescient.

Somehow, I don’t think Dustin Long is all that prescient. The opening section here has a nice tone, and I enjoyed the unfolding of Judas’s drive to translate a novel by an obscure Tibetan writer. I understand that the subsequent sections are supposed to comment on the action of that first part by transposing the ‘drama’ to other cities that are tangentially related, but I found the holes between the stories distracting. Don’t tell us the end of Judas’s story if you don’t want to, but don’t imply that it’s unfinished state is somehow the point. That sounds like an insight that seemed profound when you were stoned but pedestrian when you sobered back up.

I’d spend more time contemplating the nature of the interconnectedness and the deliberate gaps of the book if what we had were better written. Instead, these characters have little self-awareness and often mere two-dimensionality. Sela is supposedly a humanities graduate student. Instead of contemplating her circumstances with the tools of her field or through the lens of some hard-won understanding, she writes in a journal as if she were a teenage girl. Even worse, she writes in the form of letters to the boyfriend she left behind. From a male writer, that seems like the worst type of cliché, the woman who secretly wants him even as she has told him otherwise.

This feels like a novel that wants to be meaningful. It cites philosophers every so often – in that lazy hipster way – but it doesn’t seem to have a sustained philosophical point. It may be an insight that even the most thoughtful of people is still embodied, still horny, but that’s hardly an original one. When we do finally meet our obscure novelist, he’s a smooth talker who’s always on the make. There’s no sign of what might make him worthy of contemplation, nothing like the suffering and deep experience of Roberto Bolano’s Archimbaldi in 2666, or – to go to my personal favorite chestnut – the sustained writer’s block of Mordecai Richler’s Moses Berger in Solomon Gursky was Here. He’s just an old man on the make, maybe even a plagiarist. It takes a substantial writer to imagine a substantial writer, and, from the evidence here, Long is not that substantial.

I suppose there may be a worthwhile ‘play’ of form here, and I can see how the unfinished stories, broken up by geography, make for an interesting formal experiment. But even there, Long sells this short by creating a genuine climax at the end, bringing his characters together in conventional ways. And that’s undercut still further by the adolescent nature of the general yearning here.

This one got me at the start, but it got more and more frayed as it went. I’d have bailed on it if I hadn’t been three quarters of the way through by the time I realized just how disappointed I was. It may be that I’m not hip enough for it, but I’m more inclined to think it’s simply all pose and no substance.