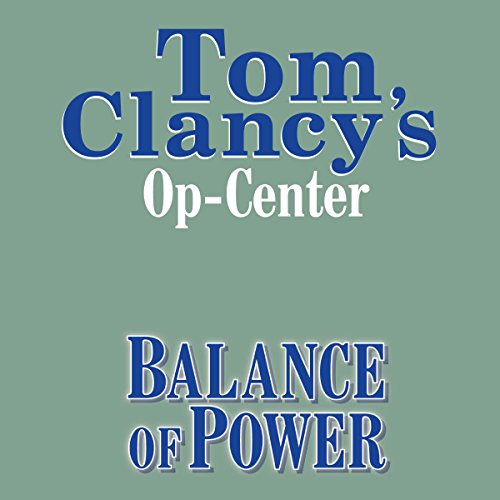 The Op-Center team heads for Spain, where ethnic conflicts threaten to break out into a conflagration. As the novel's intelligence chief Bob Herbert puts it, this clash "will make the Spanish Civil War look like a brawl."

The intelligence team's efforts to defuse the crisis are foiled when an Op-Center representative is assassinated in Madrid on her way to a high-level diplomatic meeting. Someone very powerful wants another Spanish War - no matter what the cost.

Now the crew must delicately navigate the treacherous shoals of a planned insurrection by a popular Spanish general and his troops. As usual, Clancy delivers a memorable cast of characters, and he welcomes us into the byways of little-traveled territory in this action-packed intrigue.

What listeners say about Balance of Power

This is an imitation Clancy book

I love the entire series so far. Plot is realistic and grounded. Characters are believable and quick witted. Can't wait to start next book!

Must have been a contractual thing

This book was way off the mark for a Clancy Op Center genre story. Must have been a contractual deadline book they threw together to meet the obligation to the publisher. Stretch the story to fill the space.... so boring.

I had a hard time putting it down, I have been a big fan of Tom Clance for a long time

loved it, suspenseful, kept on edge while listening, needs more of this type of novels

ortho chlorobenzyl again or else I hereby

Another Edge of Seat Ending!

Even though I read the book in paperback some years ago. And even though I listened to some later books in the Op-Center series last month and knew who would make it back home, this audio version of the story kept me up at night! With Steve Pieczenik and Tom Clancy stories I always feel like I come away wiser in the ways of the world and with restored faith in the real life characters like these who put their lives and talents on the line to serve (and save) humanity.

Where will the balance shift?

What did you love best about Balance of Power?

What I like best about Balance of Power is the realism of the Op-Center characters and their interactions with each other and their enemies. All are human and die just like everyone else and everyone has an important role to play.

Maria is my favourite characters just because I love sexy, brave and courageous female spies.

I just finished this book and found the same problems with it as I found with "Acts of War" Too many characters, too much jumping around in the story line and extremely poor story. I would give it zero stars if that were an option.