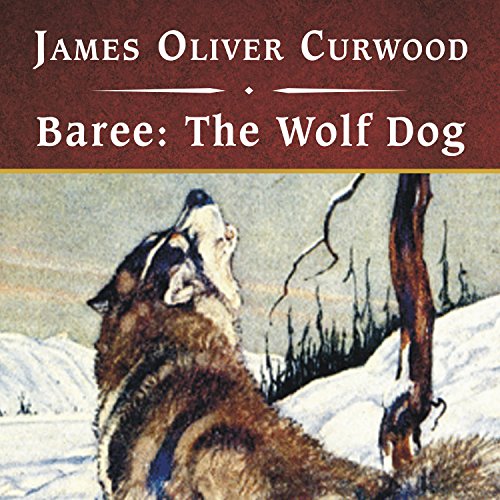 The orphan Baree belongs to no world. The wolf packs see him as a dog while the humans see him as a wolf, and both groups treat him mercilessly. When Baree meets a little human girl, though, he finds his home with her. In the tradition of Jack London, James Oliver Curwood penned great adventure tales about the animals he knew well as a tracker. Patrick Lawlor gives an excited performance, utilizing fun accents and snarling voices. Lawlor balances compassion and action sequences, so that the listener feels both empathy for Baree's plight and hooked on every word.

Baree was the son of a grey wolf and a black dog, born in the vast Canadian wilderness. He learns about nature and his fellow animals by trial and error; fighting with owls and playing with beavers. Being alone in the wild, he desperately seeks to join a pack of wolves, but they see him as a dog, and he is driven away.

The wolves were treacherous, but Baree soon learns that humans can be much worse. He is shot, beaten, and trapped, and soon learns to take care of himself. After fighting alone against the world, he befriends an Indian maiden, Nepeese, and he finds his purpose in life.

Baree: The Wolf-Dog is one of James Oliver Curwood's most cherished works.

"A timeless tale....Curwood captures the simplicity and beauty of Nature without becoming sentimental." (ALA Booklist)

What listeners say about Baree

this was a fabulous book to listen to - great for both my children (ages 11 and 12) and exciting for me too! Curwood's descriptions are breathtaking, and the suspense and drama of this tale made it a nail-biter until the very end. I highly recommend it, and hope that audible will make other stories by Curwood available soon.

In searching the internet, from what I can gather this book was published 1917. Years ago, I inherited about a dozen books that were mostly written in the early 1900's. This wasn't one of them, but because it was written by James Oliver Curwood, who wrote a couople of the other books I inhereted, I thought it would be good. It is great!
Becuase it takes time, I usually only write a review for books that I find are outstanding and are not reviewed by many other people. Since this book is outstanding, and no one reviewed yet, I thought I would take the time to write a review.
This book is about a wolf-dog (hence the title). There are not many people in this book, and they are not mentioned often. The author seems to have a wonderful understanding of animals.
The audio version of the book starts out with an introduction that gives some interesting information on the author (James Oliver Curwood). I wish more books by this author, and more books of this type, were available as audio books.
I will close by saying that currently the written version of this book has eight written reviews on amazon.com - they are all 5 stars; you can read them for more details. I would recommend this book to anyone who has any interest in animals and in the wilderness that existed in the early 1900's.

good story,not quite a nose blower but each character gets what they deserve in the end

Worth listening to more than once if you are a wildress and animal lover.