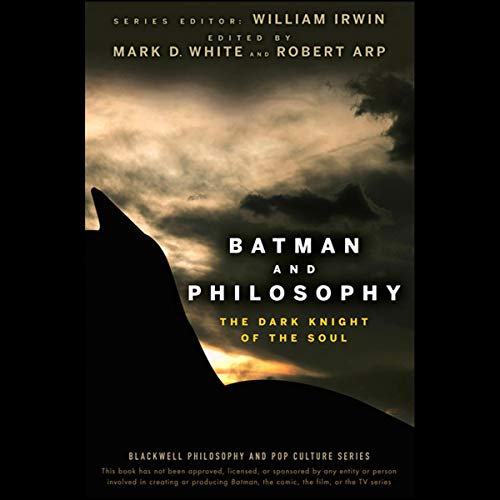 Why doesn't Batman just kill the Joker and end everyone's misery? Can we hold the Joker morally responsible for his actions? Is Batman better than Superman? If everyone followed Batman's example, would Gotham be a better place? What is the Tao of the Bat?

Batman is one of the most complex characters ever to appear in comic books, graphic novels, and on the big screen. What philosophical trials does this superhero confront in order to keep Gotham safe? Combing through 70 years of comic books, television shows, and movies, Batman and Philosophy explores how the Dark Knight grapples with ethical conundrums, moral responsibility, his identity crisis, the moral weight he carries to avenge his murdered parents, and much more. How does this caped crusader measure up against the teachings of Plato, Aristotle, Kant, Kierkegaard, and Lao Tzu?

What listeners say about Batman and Philosophy

The book dives deep into various aspects of the Caped Crusader, bringing Batman's basic elements into light. These include his style of not killing, his conception of friendship, etc. There is a lot of science and philosophy that supports various aspects of Batman's identity. The book was very informative and entertaining. It may be the same for any good Batman fan out there, looking to better understand the superhero.