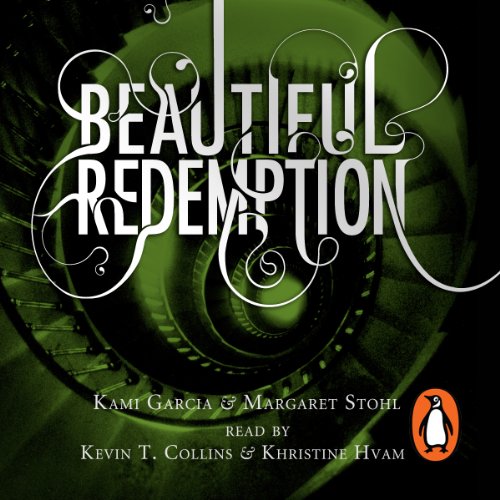 Is death the end...or only the beginning?

Ethan Wate always dreamed of leaving the stifling Southern town of Gatlin. But he never dreamt that finding love with Lena Duchannes would drive him away.

Lena is a Caster girl whose supernatural powers unveiled a secretive and cursed side of Gatlin, so powerful it forced him to make a terrible sacrifice. Now Ethan must find a way to return to Lena - and Gatlin - as she vows to do whatever it takes to get him back. Even if it means trusting old enemies or risking their loved ones’ lives.

Can Ethan and Lena rewrite their fate and their spellbinding love story in this stunning finale to the Beautiful Creatures series?

What listeners say about Beautiful Redemption

Best out of the 4 books

This story was really captivating and we finally get some answers, though sadly not all.
The narrators were really good.

A stunning series, the ending was especially poignant and the epilogue will stay with me for a while. If the authors should ever read this review, please know that your story was exceptional and most of all, Thankyou.

loved all 4 books I'm so sad there's no more, i really enjoyed them all,

The narrator changes part way though which is not the only book in this series it has happened with.
Both did a good job, it's just that you get comfortable with one of them speaking all the parts and then I suddenly changed on a chapter.

not my favourite of the 4 main books

I found this book brilliant in places. However, it also felt laboured too. The gate keeper was a good character addition. For me, this was the least brilliant ending of the 4 main caster chronicle books and an anticlimactic end to the main series.

loved it.. struggled to not listen to it again straight away.... know I will soon.

This is the fourth and final book in the Beautiful Creatures saga. I loved it!

I downloaded this book in audio format, as I wanted to read it, but didn't have time to. Having this book in audio format allowed me to listen to it whilst doing household chores, or before bedtime.
The story is again narrated by Kevin T. Collins, but this time he is joined by Khristine Hvam. Both narrators do a fantastic job bringing the characters alive by giving them their own accents and voices.

Ethan Wate is an extremely interesting character. I liked him very much. He is a sweet, loving young man, who happens to be a human in love with a Caster. This, it turns out, can be extremely dangerous.

Lena Duchannes is a character I didn't really like in the first book. She had a "woe is me" attitude that really grated on my nerves. However, as this series has progressed, she has grown on me and it has been interesting to see her transformation from an emo-girl to a confident Caster.

This story continues from the rather shocking cliffhanger at the end of the third book, and is now told from two points of view - Ethan's and Lena's. This is an exciting conclusion to this series. I was hooked from the first few minutes into the audio book.

Lena, Link, Liv and Amma are all trying to come to terms with Ethan's sacrifice to repair the order of things on the Eighteenth Moon, whilst hiding the fact that he's dead from Ethan's father. Meanwhile, Ethan finds himself in the Other World, with his mother and Aunt Prue. Ethan finds out that his page in the Caster Chronicles had been tampered with, and sets out on a quest to reclaim it.

This story is even more exciting than the previous one, and I found myself sitting on the edge of my seat on occasion. There was, however, a character I didn't expect to find in the Other World, Seraphine. She may have been a dark Caster, and made some bad decisions in her life, but I felt that she redeemed herself in the end. There are also some new characters brought into the story, such as Amma's family - the Greats - Uncle Abner, Aunt Ivy, Aunt Delilah, Twila and not forgetting Grandmama Sulla, the great prophet. It was nice to finally meet them. But, I think that my favourite character in this book was Xavier. He is a character that I really liked, but felt sorry for. He has not had an easy life, thanks to Angelus, one of the Keepers of the Caster Chronicles. I did have an unanswered question or two about Xavier, but that was my only bugbear with the story. Angelus was introduced briefly in Beautiful Chaos. As I found out more about Angelus I decided that he was definitely not someone I would like to meet.

As the story unfolded, I was cheering for not only Ethan, but for Lena and the gang as they set off on a quest of their own. The story was fast paced and exciting most of the time, but it also tended to slow down in places. However, this didn't totally stop my enjoyment of the book. It was a roller coaster ride of adventure and emotion from beginning to end. When I did finally reach the end, I found it to be bittersweet; I was happy with the ending, but sad that it had finished. I will miss these characters, mostly Link and Ethan I have to say, but I could always visit them again by re-listening or re-reading the books.

Kami Garcia and Margaret Stohl make a great writing team. Their writing style has improved a lot since the first book, and it is more fast paced. The story also flows a lot better. I would definitely read more of their books in the future.

I highly recommend this book if you love YA or Paranormal Romances. - Lynn Worton

Perfect ending to the series

What made the experience of listening to Beautiful Redemption the most enjoyable?

How Ethan battles on his side and the others battles on theirs to bring Ethan back. It was very sad how a life had to give given for one to come back. Loved the way Ethan communicated with the others.

The battle to get Ethan's page out of the chronicles.

Have you listened to any of Kevin T. Collins and Khristine Hvam ’s other performances? How does this one compare?

Death is not the end. It's just the beginning.

Fantastic I was sad it ended.

I loved this series so much.

I just loved this series so much I could not stop read or listing just loved it.

Brilliant end to a brilliant series

The caster chronicles was amazing, their portrayal of death inspiring and a perfect ending to keep you smiling for days. If I'm going to nitpick the only negative thing I can possibly say is at times it was hard to differentiate between some of the characters when the female was narrating. Other than that as close to perfect as it can get.